Read on Twitter
A thread on how shoddy and littered with howlers is Devdutt Pattanaik's work.
I will take just one book as an example - "The Illustrated Mahabharata", published by @dkbooks
1. Devdutt writes "Gandhari decided to force the child out of her. She ordered her maids to strike her belly with an iron bar."
Fact: neither the Critical Edition nor the Gita Press have any such mention.
What the Mahabharata says is - "Gandhari violently struck her belly and aborted herself, fainting with the pain."
From a tragic act of self-abortion, taken in the heat of the moment, Devdutt makes it a horrific, conscious, and deliberate act of deliberate murder. 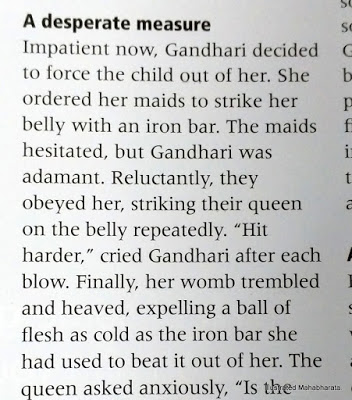 2. Devdutt's shoddy work exhibit: Satyavati's departure.
He writes: Satyavati "decided to leave the palace on witnessing a public fight between the Pandavas and Kauravas."
Mahabharata: it was Vyasa who told Satyavati that hard times were ahead, and advised her to "give everything up and live in a hermitage. You will not be able to witness the destruction of your sons and lineage." [Adi Parva, Ch 119]
Not one word about "witnessing a public fight"
3. Devdutt's shoddy work exhibit: Karna giving away his armour and earrings.
What he writes: when Indra, Arjuna's celestial father, approached Karna and asked him for his earrings and armour, "Karna instantly gave them away."
The Mahabharata:
1. Karna first refused. Yes. "I will not part with them."
2. He agreed later, but only as an exchange - "Otherwise, I will not give them."
Subtle distortions, without any rational reason.
4. Devdutt's shoddy work exhibit: Devayani and Yayati.
What he writes: "While helping her out, he had held her hand. Having done so, tradition demanded that he marry her."
What the Mahabharata says: Devayani told Yayati that she wanted to marry him. She went to her father and told him, "I will accept no one else in the world as my husband.”
Holding hands dictated traditions? Rubbish.
Rather, "Yayati gently bid farewell and returned to his capital."
5. Devdutt's shoddy work exhibit: Jayadratha's death.
What he writes: "Drona was livid that despite his desperate measures, Jaydratha had been killed. He ordered his troops to continue fighting against the Pandavas after the sun had set..."
What the Mahabharata says: Duryodhana let loose a tirade against Drona.
Drona was not "livid". Instead, he questions Duryodhana - "All of you surrounded Arjuna and sought to protect the king of Sindhu. How was he killed in your midst?"
6. Devdutt's shoddy work exhibit: Shikhandi
What he writes: Shikhandi's "contribution has been given little importance."
The Mahabharata has an entire parva on Shikhandi and his past: Ambopakhyana.
It is recounted by none other than Bhishma.
It is set just before the war.
An indication of the importance given to Shikhandi and his role.
7. Devdutt's shoddy work exhibit: utter confusion
At one place he writes about the "plight of old men and women and the way they are treated by their sons and daughters."
At another, "older generation dominates society."
The man doesn't know on page 2 what he wrote on page 1.
8. Devdutt's shoddy work exhibit: Parashurama vs Bhishma.
He writes, "Parashurama gave up. 'Since Bhishma is impossible to kill, this fight has to stop.' he said."
The Mahabharata tells us that the fight between Parashurama & Bhishma ended because Bhishma withdrew a weapon that he had drawn, ready to fire. The gods advised Bhishma against doing so, and he complied. Parashurama took that to be his defeat.
Again, pointless distortions.
9. Devdutt's shoddy work exhibit: Uttarayana
What he writes, "... Uttarayan, after the winter solstice, when the sun moves close to the Pole Star - the bright half of the lunar month, when the moon is waxing."
I don't even need to add anything here.
</> 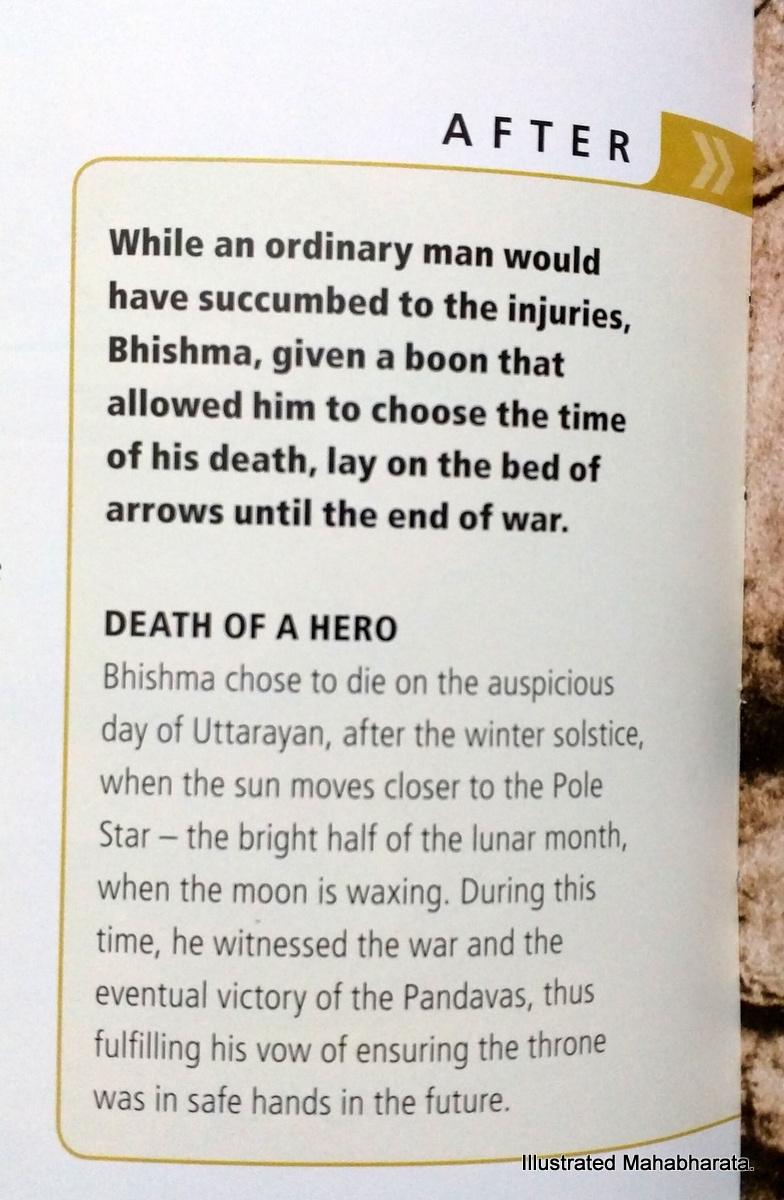 Since Devdutt did respond to my thread ( https://twitter.com/devduttmyth/status/1162988792627601408), I thought it only appropriate to continue my thread to clarify a few points. 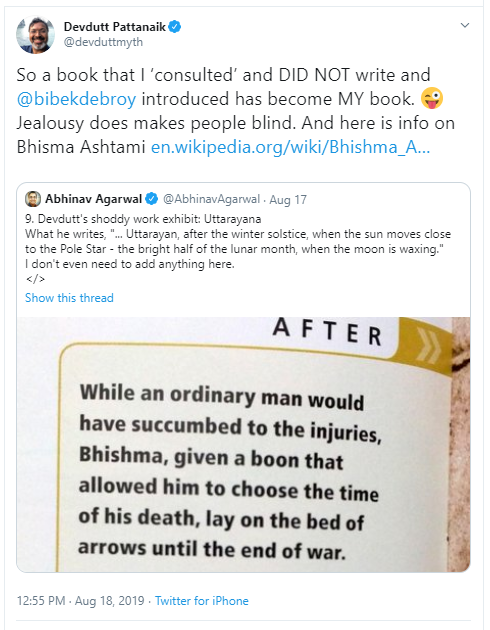 First, to his point that he “DID NOT write” the book, let’s take a few examples, from the book “Jaya”, that he has indeed written, and compare them with what I have quoted from the "Illustrated Mahabharata".
This is from the “Illustrated Mahabharata” – “Gandhari decided to force the child out of her. She ordered her maids to strike her belly with an iron bar." (see my tweet in the thread above).
And this is from “Jaya” (the book that I hope Devdutt doesn't say he 'DID NOT write')
Jaya, Ch 15 – Birth of Gandhari’s Children: “Gandhari ordered her maids to get an iron bar. ‘Now strike me on my belly with it,’ she ordered...."
"... The maids hesitated. ‘Do it,’ shouted Gandhari. With great reluctance, the maids did as they were told, and struck the queen on her belly. ‘Again. Strike me again. Again and again,’ said Gandhari.”

Any difference between what’s in the two books?
Second example.
From The Illustrated Mahabharata: Satyavati "decided to leave the palace on witnessing a public fight between the Pandavas and Kauravas."
Devdutt in Jaya, Ch 21 – The graduation ceremony – “Watching her great grandsons snarl at each other like street dogs, Satyavati took a decision. ‘I see this family I worked so hard to create will soon destroy itself. I cannot bear to see it. I will therefore go to the forest.’”
Any difference between what is in the two books?
It gets worse now.
I looked a little more at Devdutt’s Jaya, and a five-minute sampling revealed even more, and even worse, errors.
A couple of them...
In Jaya, Ch 82 - Death of Abhimanyu, Devdutt writes, “When it was time for him to finally enter, after Bhishma’s death, an old man came to him, at dawn, begging for alms.”
It takes talent to get so many things wrong in just one sentence!
When does the Mahabharata actually place this event?
Indra took away Karna’s kavacha and kundela much before the war.
This episode is described in an upa-parva of its own, “Kundala-aharana Parva”, the 43rd upaParva.
After this episode the Pandavas spend a year in agyata-vaasa, the go-grahana happens, Uttaraa is married to Abhimanyu, the entire Udyoga parva takes place, the war starts, Bhishma is killed, and then Drona, and only then does Karna become the commander of the Kaurava army.
Oh, what Devdutt describes as an "old man", the Mahabharata describes as a “brahmana”.
Again, howlers and distortions in a single sentence.
From Jaya, Ch 103 – The elders renounce the kingdom, Devdutt writes, "Sanjay followed his master to the forest and died with them in the forest fire, such was his loyalty to the old, blind king."
What does the Mahabharata say?
From the Naradagamana upa-parva of the Ashramavasika Parva (Ch 45):
“But Sanjaya, the great adviser, escaped from the conflagration. I saw him on the banks of the Ganga, ...The suta, Sanjaya, next left for the Himalaya mountains.”
I could spend five minutes more and find more errors, distortions, and outright fabrications in Devdutt's Jaya and Illustrated Mahabharata.
</>
Devdutt: "Shiva is not mentioned in Vedas. Does that make him fictional, as per your research?"
The joke is on the people who still buy, still read, still publish this fraud's trash. 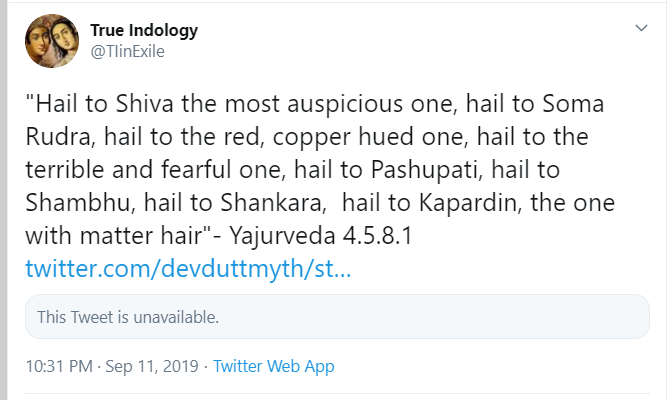 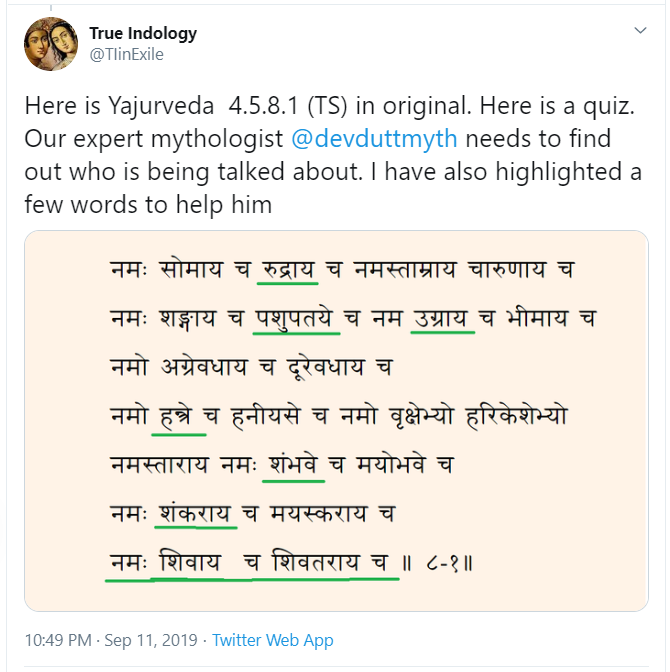 You can follow @AbhinavAgarwal.
Tip: mention @twtextapp on a Twitter thread with the keyword “unroll” to get a link to it.