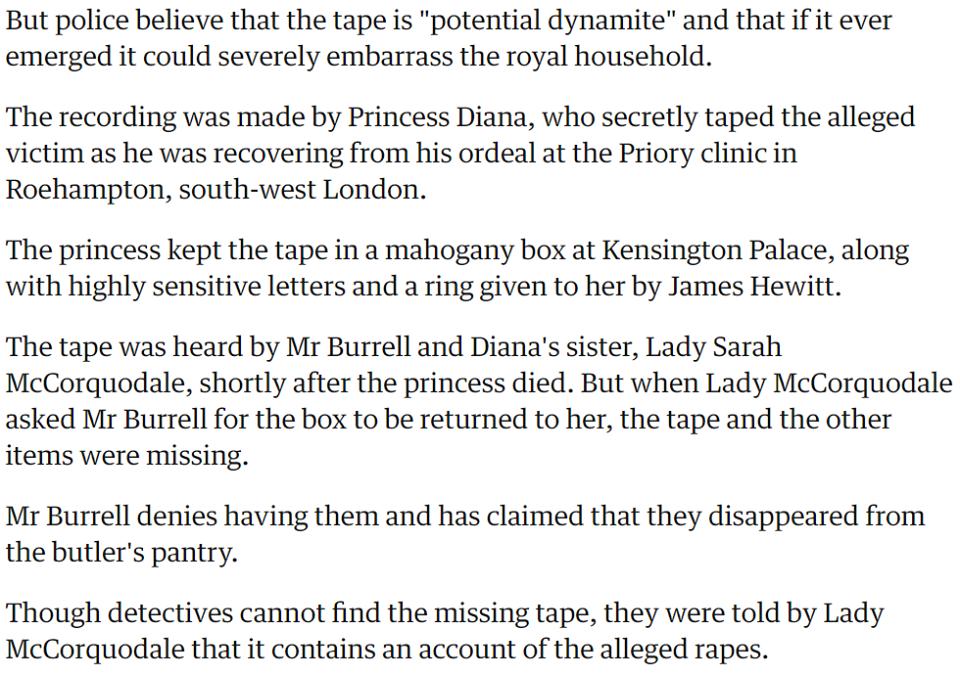 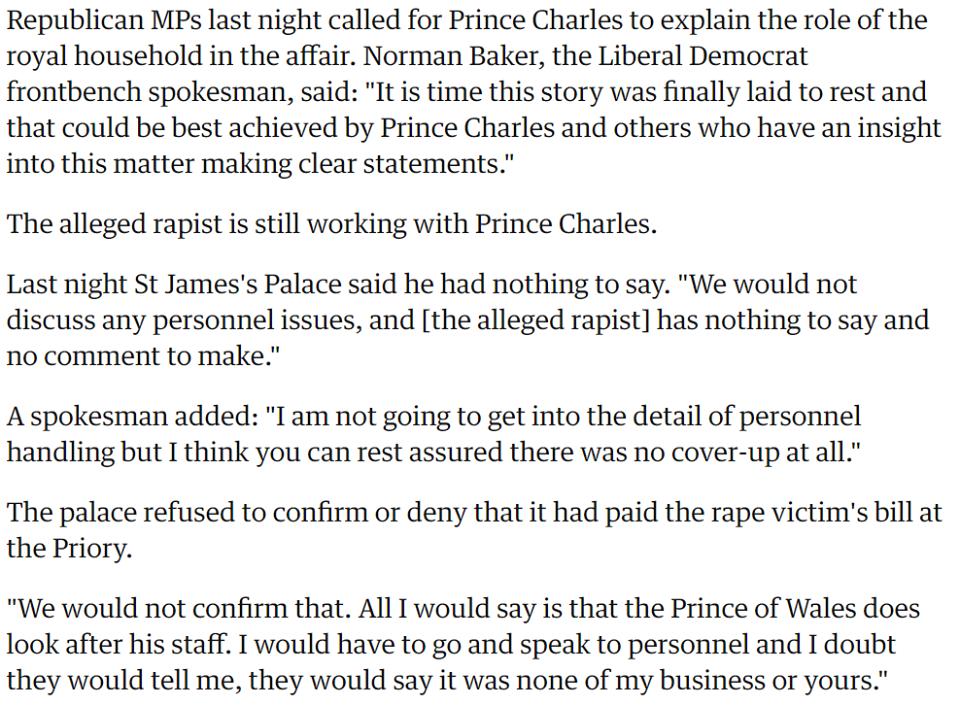 Perhaps one day we will find out what really happened to Diana, who visited the hospitals and care homes Jimmy Savile was preying on at all hours of the night, consoled Elm Guest House victims, and recorded palace rape victim testimony. #OpDeathEathers https://twitter.com/GeorgieBC/status/546459394561814528

Charles had long been an admirer of the charismatic and dedicated Anglican churchman, who slept on an old horsehair mattress on the floor of his own Gloucester residence, writes RICHARD KAY.

Peter Ball, former bishop of Lewes, sentenced to 32 months after admitting abuse of 18 young men between 1977 and 1992

http://www.theguardian.com/uk-news/2015/oct/07/bishop-peter-ball-escaped-charges-mps-royal-family-intervened-court
Prince Andrew (son of Prince Philip and brother of Prince Charles) secretly filmed with child rape slave he is alleged to have abused according to papers filed during first #Epstein trial. #OpDeathEaters http://www.mirror.co.uk/news/uk-news/prince-andrew-been-secretly-filmed-4915421#ICID=sharebar_twitter
Prince Andrew may have been secretly filmed with girl abuse claims girl

http://www.mirror.co.uk/news/uk-news/prince-andrew-been-secretly-filmed-4915421#ICID=sharebar_twitter
Bodyguards watched as Prince Andrew "partied" with children. 100s of children are believed to have been raped and tortured at #Epstein's mansion that Prince Andrew frequently visited. #OpDeathEaters http://www.dailymail.co.uk/news/article-2905850/Andrew-s-guards-turned-blind-eye-Yard-officers-watched-Duke-partied-young-girls-says-Epstein-s-butler.html
Boudyguards watched as Duke partied with young girls, says butler

Prince Andrew was accompanied by two 'off-duty' bodyguards, who slept in one of the guest bedrooms when he visited Jeffrey Epstein's Florida mansion, butler Juan Alessi has claimed.

http://radaronline.com/exclusives/2015/01/prince-andrew-sex-slave-allegations/
In the UK Scotland Yard was urged to investigate Prince Andrew and bodyguards over child rape allegations by a prominent child abuse charity.

The police response: “Our current activity does not constitute an investigation.” #OpDeathEaters https://www.standard.co.uk/news/uk/scotland-yard-urged-to-investigate-prince-andrew-sex-allegations-9982484.html
Scotland Yard urged to investigate Prince Andrew sex allegations by

A leading child abuse charity is urging Scotland Yard to review the  sex allegations involving Prince Andrew to determine if a crime has been committed.

When Virginia Roberts decided to join the U.S. government's civil case against convicted pedophile Jeffrey Epstein it completely blew the lid off of a major scandal. Epstein took a plea deal in late...

http://theguardian.com/uk-news/2015/apr/07/prince-andrew-jeffrey-epstein-florida
" #Epstein himself, questioned under oath, refused to answer" when questioned about Prince Andrew (and others like Bill Clinton and Donald Trump). #OpDeathEaters http://www.telegraph.co.uk/news/uknews/theroyalfamily/11326535/Prince-Andrews-friend-Jeffrey-Epstein-used-aggressive-witness-tampering-to-prevent-truth-coming-out.html … 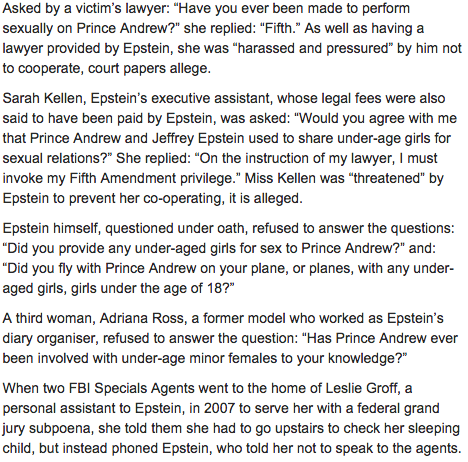 Meanwhile, this is how UK media covers Prince Andrew (left img) and when they do mention the #Epstein case, they paint Andrew as the victim (right img). #OpDeathEaters 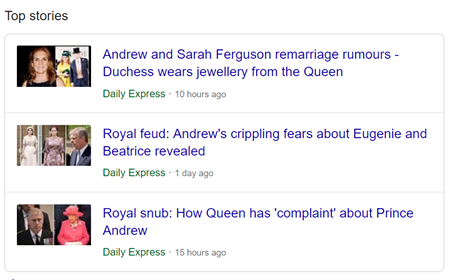 This is what obstruction of justice looks like. (Prince Charles using his Royal influence to intervene on behalf of paedosadist Peter Ball) #OpDeathEaters https://www.telegraph.co.uk/news/2019/05/09/prince-charles-criticised-official-sex-abuse-inquiry-misguided/?fbclid=IwAR2ukel5ifgiutbALnGQSruRWtmWSRQbGVpoy9c4jlVNytNktjclfR3yEbo 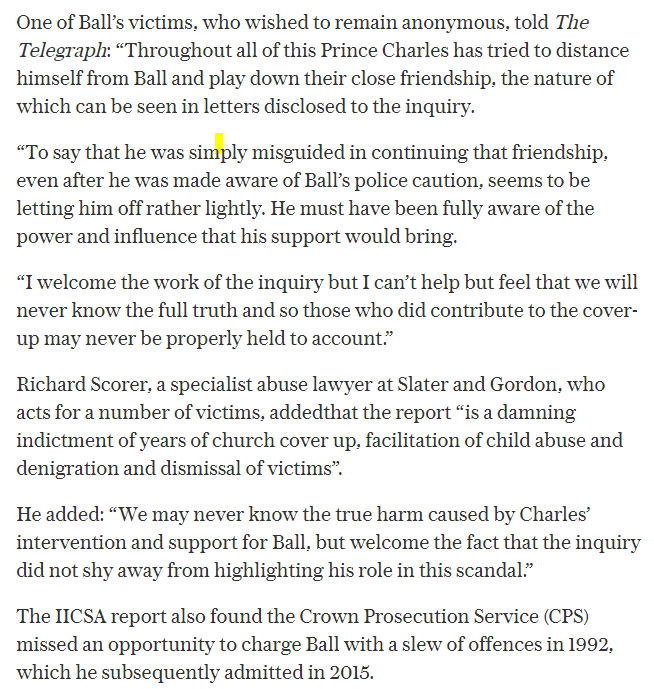 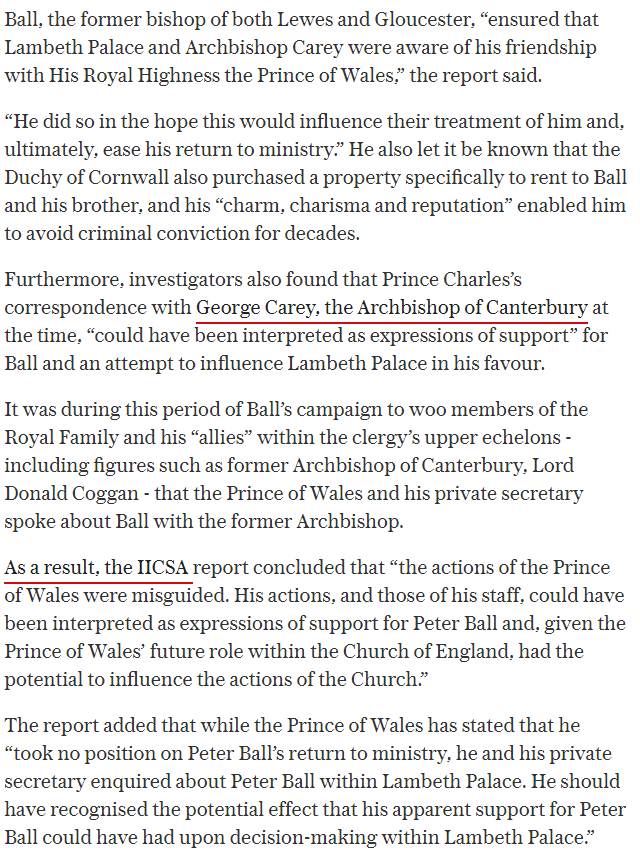 Prince Charles knowing fully well that Peter Ball was a paedosadist went as far as obtaining property on his behalf as support. #OpDeathEaters https://www.cornwalllive.com/news/cornwall-news/bishop-who-sexually-abused-vulnerable-3010957?fbclid=IwAR1IlgKogahOhItx1ea3tm225BaU_p9py3ymIbwBgcs-L-5W8JF0BDvElNM

Prince Charles gifted Peter Ball large sums of money “I wish I could do more. I feel so desperately strongly about the monstrous wrongs that have been done to you and the way you have been treated.” and wanted him to "come over more easily" #OpDeathEaters https://inews.co.uk/news/uk/prince-charles-paedophile-bishop-peter-ball/ 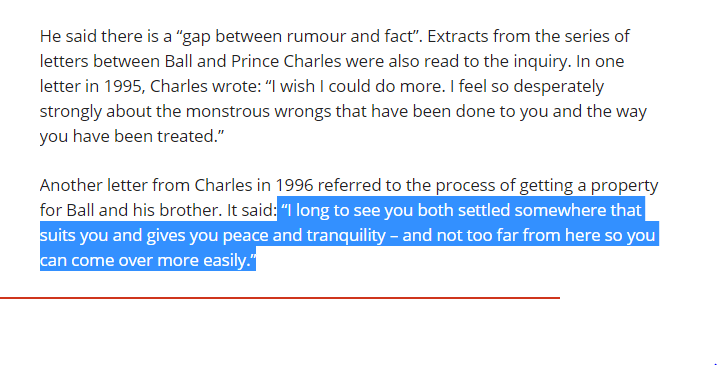 Prince Charles in revealed letters promised to "see off..." one of Peter Ball's victims Neil Todd who later committed "suicide" in 2012 as a renewed investigation opened up. #OpDeathEaters 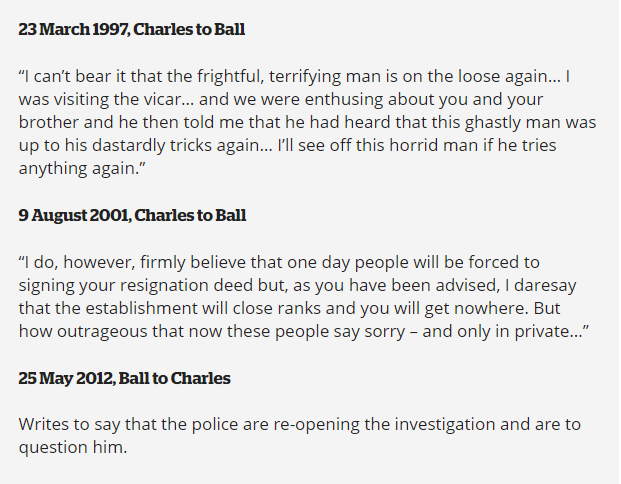 Prince Andrew has been criticised for attempting to build closer business links with Saudi Arabia in the wake of the killing of Jamal Khashoggi. The Duke of York told entrepreneurs at the Emirates

https://www.independent.co.uk/news/uk/home-news/prince-andrew-saudi-arabia-royal-family-business-khashoggi-murder-turkey-consulate-tape-a8602476.html?fbclid=IwAR2ckQZkNr05_Z42BIT9izU370nNtr0JlFRDlKoce5ZPrmdiiRYoi_-BD2U
It's a network - it just needs mapping. #OpDeathEaters https://www.thedailybeast.com/prince-andrew-picks-the-worst-moment-to-cozy-up-to-saudi-arabia?fbclid=IwAR0W7OMWzMEtkt1rkndCOHOZBpaN5a7cVvnEZkQHGyTqWi4BZ5-k6Md6N6s
Prince Andrew Picks The Worst Moment To Cozy Up To Saudi Arabia

Many countries have rushed to disassociate themselves from the Saudi regime in the wake of Jamal Khashoggi's murder. But Prince Andrew is keen to promote the regime publicly.

https://www.thedailybeast.com/prince-andrew-picks-the-worst-moment-to-cozy-up-to-saudi-arabia?fbclid=IwAR0W7OMWzMEtkt1rkndCOHOZBpaN5a7cVvnEZkQHGyTqWi4BZ5-k6Md6N6s
Prince Andrew (with Jeffery Epstein) and Prince Charles (with Peter Ball) are clearcut obstruction cases and why are they not both charged? #OpDeathEaters https://twitter.com/GeorgieBC/status/551549759631396866

Read this whole thread; can Prince Andrew and friends be charged in the United States on obstruction of justice, If no, why not? #Epstein #OpDeathEaters https://twitter.com/GeorgieBC/status/551821728020987904

Prince Andrew and Prince Charles are not "dragged into" or "associated with" paedosadists; call it what it is obstruction of justice and influence peddling in criminal networks. #OpDeathEaters https://twitter.com/GeorgieBC/status/556124026071175168

It is a mafia protection racket available to the highest bidder. #OpDeathEaters (link: https://georgiebc.wordpress.com/2018/05/31/transcript-of-whistleblowing-panel-censored-by-oxford-union/)

A reminder that this is what a network looks like.

Why was Prince Andrew so eager to throw his influence behind Saudi Arabia following the murder of Jamal Khashoggi (the nephew of Andann Khashoggi) by MBS? #OpDeathEaters https://twitter.com/OpDeathEaters/status/1151667179424583681

Queen's honours list. All named as or accused as paedosadists or implicated in child trafficking. (Part 1):

Sir Rolf Harris, Sir Stuart Hall, Sir Maurice Oldfield, Sir Anthony Blunt, Sir Knox Cunningham, Sir Nicholas Fairbairn, Sir William van Straubenzee. #OpDeathEaters
Please help us find more names of those in the Queen's honours list we may have missed that are known or suspected of being paedosadists or implicated in child trafficking. #OpDeathEaters
After #Epstein's sham trial and sentence in 2011 Prince Andrew was seen strolling with him in New York. Shortly after Fergie (Sarah Ferguson) accepted an estimated £20,000 from Epstein to clear her debts. #OpDeathEaters https://nypost.com/2011/03/08/i-took-from-perv-fergie/
I took $$ from perv: Fergie

A notepad taken by police from the Miami mansion of Jeffrey Epstein in 2005 when they began probing him for sex crimes includes a message from Sarah Ferguson, Duchess of York.

Body of 17 year old girl found on Queen's Sandringham estate, UK media calls her a "drug-addicted wild child", blaming the child for her own still 'unsolved' murder. #OpDeathEaters https://www.dailymail.co.uk/news/article-2092886/Alisa-Dmitrijeva-Teenager-murdered-Queens-Sandringham-estate.html
Drugs, the teenager found murdered on the Queen's estate and how the Baltic Mafia is terrorising...

Alisa Dmitrijeva's corpse was so badly decomposed that police forensic scientists were only able to identify it by using the DNA from her bones.

https://www.dailymail.co.uk/news/article-2092886/Alisa-Dmitrijeva-Teenager-murdered-Queens-Sandringham-estate.html
Mystery royal was part of paedosadist network in the 1980s being investigated by Scotland Yard but the inquiry was shut down for "national security reasons". #OpDeathEaters https://www.dailymail.co.uk/news/article-3006218/Mystery-royal-suspected-paedophile-ring-investigated-Scotland-Yard-inquiry-shut-national-security-reasons.html https://twitter.com/GeorgieBC/status/579658884941512704
FBI files show they knew Lord Mountbatten had “a lust for young boys”. The dossier was compiled during WWII and the Suez Crisis, in 1944, shortly after Mountbatten became Supreme Allied Commander of SE Asia and added to it for three decades. #OpDeathEaters https://www.thesun.co.uk/news/9745399/lord-mountbatten-fbi-dossier-prince-charles/
Prince Charles’ mentor Lord Mountbatten was ‘a homosexual with a perversion for young boys’, FBI...

NEWLY unearthed FBI files describe Prince Charles’s mentor, Lord Mountbatten, as “a homosexual with a perversion for young boys”. The decorated war hero was seen as a father figure to the young Cha…

https://www.thesun.co.uk/news/9745399/lord-mountbatten-fbi-dossier-prince-charles/
Prince Andrew has released a statement saying he is "appalled" at his buddy #Epstein's "sex abuse claims". His ex, Sarah has said she finds accusations against Andrew "shockingly accusatory". #OpDeathEaters https://twitter.com/der_bluthund/status/1163575938602479617

The Duke was spotted peering around the door of the billionaire's Manhattan home in December 2010 on a day where a procession of young women were seen entering the property.

Members of the royal family have been paid hundreds of thousands of pounds by a Hong Kong tycoon to provide contacts and advice.Zara Tindall, her brother Peter Phillips, and the Duchess of York have

https://www.thetimes.co.uk/article/hong-kong-tycoon-puts-zara-tindall-peter-phillips-and-sarah-ferguson-on-his-payroll-srvhtfpm2
Sarah was heavily involved in charities such as Children In Crisis and Street Child, targeting children from eastern Europe. Her friends #Epstein and #Maxwell, who purchased children from Balkans child trafficker #Brunel, paid her for what? #OpDeathEaters https://www.nytimes.com/1994/02/16/garden/at-tea-with-the-duchess-of-york-mercy-mischief-and-a-royal-fiction.html 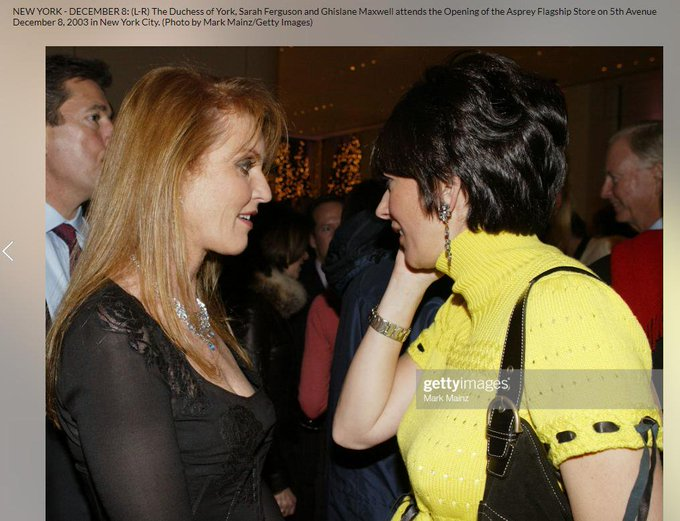 Sarah was appointed as a UN goodwill ambassador with special responsibility for refugees in 1993. "the selection of Fergie was done at the expense of Princess Diana." "Princess Diana was prevented from visiting Bosnia in the early 1990s" #OpDeathEaters https://books.google.com/books?id=hjweCwAAQBAJ&pg=PA29&lpg=PA29&dq=duchess+of+york+children+charity+bosnia&source=bl&ots=9eENtsYJx0&sig=ACfU3U2KGz9JGrqNsrQN_6nQwCwDPf-2Yw&hl=en&sa=X&redir_esc=y#v=onepage&q&f=false 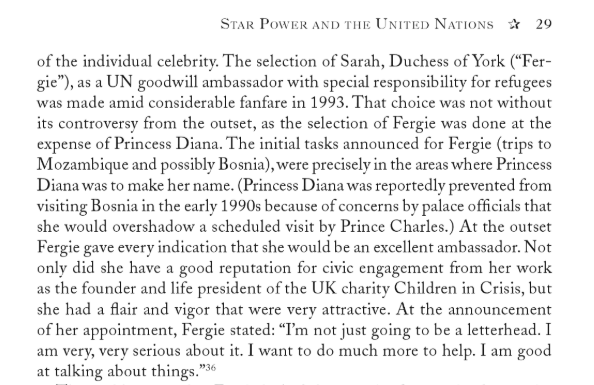 Sarah and Diana were initially very close and had a falling out around the time of their divorces that lasted until Diana was killed in 1997, along with Adnan Khashoggi's nephew Dodi al-Fayed. #OpDeathEaters
Diana thread ---> https://twitter.com/GeorgieBC/status/544971717500604417

Diana, who was always criticized for not sticking to itinerary and talking to people she was not directed to, was not allowed to go to Bosnia and snubbed by the UN while this was going on in Bosnia and the UN (thread). #opDeatheaters: https://twitter.com/GeorgieBC/status/545744057621053440

Paul Page, who served in the Royal Protection Command from 1998 until 2004, alleged that Ghislaine Maxwell made several secret trips to the palace to meet with the Duke of York.

Allegations he joined Epstein’s sex parties have clouded Andrew’s reputation for years. Plus, a non-story about the Queen and Brexit, and Will, Kate, and their kids sail away.

The billionaire reportedly flew into the UK to attend the luxurious Victorian themed party at Windsor castle in 2006, according to royal sources.

British intelligence chiefs are concerned that Russia may have obtained kompromat, compromising material, on Prince Andrew over the Jeffrey Epstein scandal.MI6 is understood to be concerned about the

https://www.thetimes.co.uk/article/now-fbi-investigates-prince-andrews-links-to-epstein-xr2k0p3cx
You can follow @OpDeathEaters.
Tip: mention @twtextapp on a Twitter thread with the keyword “unroll” to get a link to it.