Lavish villas, perfumed houris, costume balls, fabulous deals with foreign powers and Oriental potentates—Adnan Khashoggi’s life was an eighties remake of The Thousand and One Nights. The rumors...

It was the end that the most extravagantly wealthy arms dealer of the modern era would have wished for. Adnan Khashoggi died peacefully, surrounded by his loving family, just days short of his 82nd 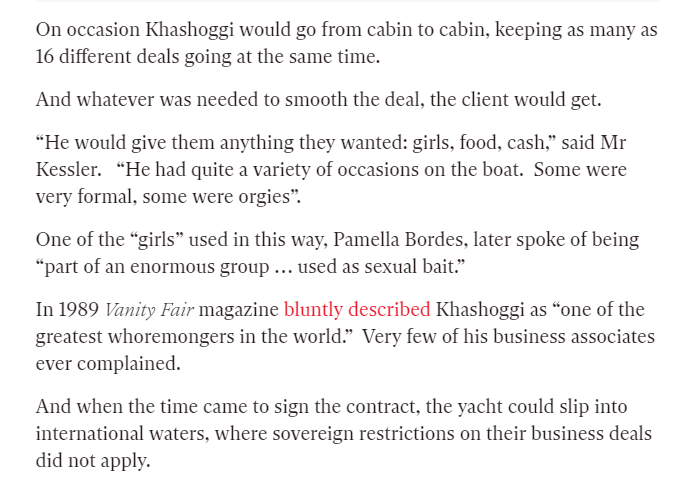 In the Iran-Contra scandal, Andann Khashoggi was named as one of the key middlemen between Oliver North (pardoned by Barr ) in the White House and Iran. Which aimed to arm fascists and spread right-wing ideology in Latin America. #OpDeathEaters https://truthout.org/articles/trumps-attorney-general-nominee-helped-bush-sr-get-away-with-murder/
Trump’s Attorney General Nominee Helped Bush Sr. Get Away With Murder

William Barr, an Iran-Contra alum, is a menace to the cause of justice.

https://truthout.org/articles/trumps-attorney-general-nominee-helped-bush-sr-get-away-with-murder/
Coincidently enough the former head of the DIA David Shedd, behind the censorship of journalist Heather Marsh at the @OxfordUnion for pointing out the Epstein story, was also involved in the Iran-Contra affair out of his own admission. #OpDeathEaters https://world.wng.org/2015/06/david_r_shedd_snakes_and_scorpions?fbclid=IwAR20GykLS40j1Rkc172Ochns1eUcQd8qAGUbLxDgwjSwuEkdt6MpC8H6w2w 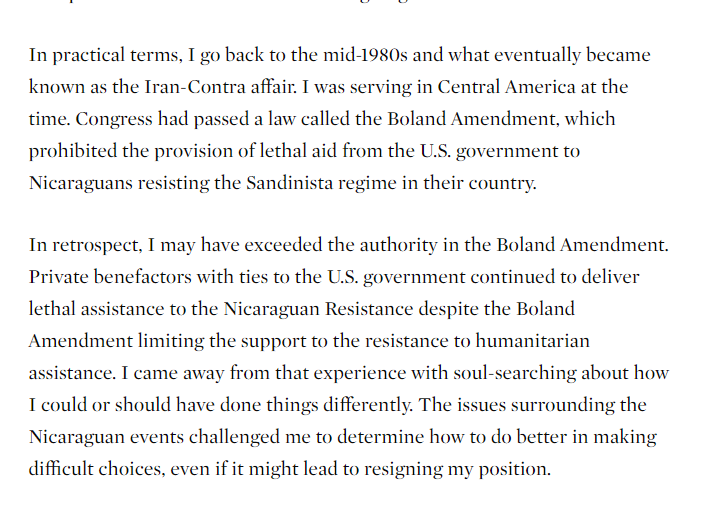 What was David Shedd's involvement with Khashoggi during the Iran-Contra affair and what is he doing with money laundering and human trafficking in South America right now?? #OpDeathEaters https://georgiebc.wordpress.com/2018/05/31/transcript-of-whistleblowing-panel-censored-by-oxford-union/

Even though the networks may lose members; those remaining keep going. Why did Prince Andrew (a friend of #Epstein who had a hidden KSA passport) throw his influence behind KSA following the murder of Andann Khashoggi's nephew Jamal by MBS? #OpDeathEaters https://twitter.com/OpDeathEaters/status/1152741483843182592

"[Girls on Khashoggi's yacht] Some of them looked so young, they could have been assumed to be high schoolers... I knew he met with world leaders like Ronald Reagan. He sometimes talked about aircraft deals with Saudi Arabia" -Jill Dodd #OpDeathEaters https://nypost.com/2017/05/27/i-was-a-saudi-arms-dealers-pleasure-wife/
I was a Saudi arms dealer’s ‘pleasure wife’

Billionaire Saudi Arabian arms dealer Adnan Khashoggi is best known for his roles in some of the most infamous political scandals of the 1980s. They include the Iran-Contra affair (he was a key

https://nypost.com/2017/05/27/i-was-a-saudi-arms-dealers-pleasure-wife/
"By the beginning of 1982, I noticed a change in the type of girls who showed up at the dinners. They were less sophisticated models from Hollywood agencies." - Jill Dodd #OpDeathEaters https://nypost.com/2017/05/27/i-was-a-saudi-arms-dealers-pleasure-wife/

"Khashoggi would go from cabin to cabin... whatever was needed to smooth the deal, the client would get. He would give them anything they wanted: girls, food, cash,” - Pamella Bordes #OpDeathEaters https://www.independent.co.uk/news/long_reads/adnan-khashoggi-dead-saudi-arms-dealer-playboy-pleasure-wives-billionaire-lifestyle-wealth-profit-a7778031.html?fbclid=IwAR1e_HF76EdnWPimNgNPBK5td9tarTNvygseir2C6ZSfR4PG82Vj_9aLuLE

"When the time came to sign the contract, the yacht could slip into international waters, where sovereign restrictions on their 'business' deals did not apply." #OpDeathEaters 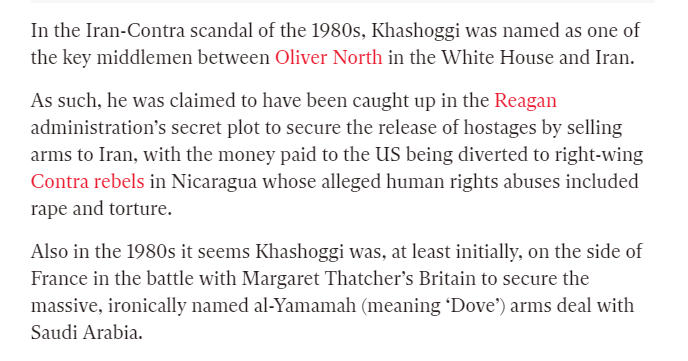 "At least some of Khashoggi’s commissions, meanwhile, have been directed towards front companies in Switzerland and Liechtenstein." #OpDeathEaters https://www.irishtimes.com/business/panama-papers-links-revealed-to-spies-and-iran-contra-affair-1.2599083
Panama Papers: Links revealed to spies and Iran-Contra affair

https://www.irishtimes.com/business/panama-papers-links-revealed-to-spies-and-iran-contra-affair-1.2599083
Khashoggi appears in the Mossack Fonseca files as early as 1978, when he became president of the Panamanian company ISIS Overseas S.A. #OpDeathEaters

Mossack Fonseca processed payments from the Adnan Khashoggi Group in the same year that he made global news when the US charged him with helping Ferdinand Marcos, president of the Philippines, loot millions. Khashoggi was later cleared. #OpDeathEaters https://www.nytimes.com/1990/05/24/nyregion/focus-at-marcos-trial-turns-to-khashoggi.html
Focus at Marcos Trial Turns to Khashoggi https://www.nytimes.com/1990/05/24/nyregion/focus-at-marcos-trial-turns-to-khashoggi.html
"I went everywhere, did everything, I was a sexual bait or a sexual bribe or a sexual present..." Pamella Bordes on the call-girl (human trafficking) network set up by Khashoggi for high profile clients. #OpDeathEaters https://www.indiatoday.in/magazine/international/story/19890515-pamela-bordes-tells-the-story-of-her-high-flying-but-sordid-double-life-816065-1989-05-15
Pamela Bordes tells the story of her high-flying but sordid double life

https://www.indiatoday.in/magazine/international/story/19890515-pamela-bordes-tells-the-story-of-her-high-flying-but-sordid-double-life-816065-1989-05-15
Pamella Bordes was sold at the behest of pimps like Adnan Khashoggi and Indian 'godman' Chandraswamy who she met through a Nepali diplomat. Chandraswamy had influential contacts, including Khashoggi, then one of the richest men in the world. #OpDeathEaters https://economictimes.indiatimes.com/magazines/panache/adnan-khashoggi-the-arms-dealer-disarmed-by-indian-bombshell-pamella-bordes/articleshow/59155310.cms
Adnan Khashoggi: The arms dealer, disarmed by Indian bombshell Pamella Bordes

https://economictimes.indiatimes.com/magazines/panache/adnan-khashoggi-the-arms-dealer-disarmed-by-indian-bombshell-pamella-bordes/articleshow/59155310.cms
Human trafficker Chandraswamy "offered her a job as a public relations executive, polished her up and used her to introduce him to the rich and famous all over the US. Among them was Jim Wright, speaker of the House of Representatives" #OpDeathEaters https://www.latimes.com/archives/la-xpm-1989-04-18-mn-2024-story.html
THE ETHICS CHARGES AGAINST JIM WRIGHT : EXCERPTS: 'Wright Did Not Show Reasonable Care on Gifts'

The following are excerpts from the report by Richard J.

https://www.latimes.com/archives/la-xpm-1989-04-18-mn-2024-story.html
Bordes admitted she spent two secret weekends in Paris. One was with a Brazilian who had been a former lover. The second was to meet Ahmed Gadaffi Al Diam, a cousin of Colonel Gadaffi and a senior Libyan intelligence agent. #OpDeathEaters https://www.aberfoylesecurity.com/?p=1123
Bordes allowed herself to be used, in return for money. The clients included men of prominence such as Prince Mohammad of Saudi Arabia. "Khashoggi has all these deals going and he needs a lot of girls for sexual bribes. I was just part of an enormous group." #OpDeathEaters

Adnan Khashoggi was the uncle of Dodi al Fayed who was killed alongside Princess Diana, who prior to her sudden death had been spotted talking to victims of sexual abuse and visited the hospitals and care homes Jimmy Savile was preying on. #OpDeathEaters https://twitter.com/OpDeathEaters/status/1152145933460656128

Adnan Khashoggi was also the uncle of Jamal Khashoggi who was brutally murdered on orders of MBS. The Saudi leader which child trafficker #Epstein (a close friend of Prince Andrew) kept a portrait of in his office alongside a KSA passport. #OpDeathEaters https://twitter.com/OpDeathEaters/status/1152741483843182592

Khashoggi's first client was Mohammed Bin Laden (father of Osama Bin Laden) who was working on major construction projects, he put Bin Laden in touch with a truck manufacturer in California & was paid a commission. #OpDeathEaters https://www.thedailybeast.com/the-pirate-who-became-the-first-truly-famous-arab-tycoon?fbclid=IwAR0NLgFfMd_Am_w_ppfZ2u9fvMEMdqR7w0U7aa18iyEQ4QxjtnAm-0iu1s4
The Rise and Fall of a Billionaire Arab Playboy

At his peak, Adnan Khashoggi was a billionaire arms dealer whose lifestyle was so lavish and scandalous it was turned into a best-selling novel.

Khashoggi age 26 was hired as an agent by Lockheed Martin, had extensive relationships with a number of key Saudi officials. He was close to Prince Sultan, the future defence minister & Prince Fahd, who would later rule the kingdom. [pg 266] #OpDeathEaters https://www.worldhistory.biz/download567/Feinstein,Andrew-TheShadowWorld-InsidetheGlobalArmsTrade.pdf

1970 - 1975 Khashoggi was paid $I06m in commissions, the amount he kept is unknown [see #PanamaPapers for clue]. Lockheed's VP for International Marketing Max Helzel described him as 'for all practical purposes a marketing arm of Lockheed. #OpDeathEaters https://en.wikipedia.org/wiki/Lockheed_bribery_scandals
Khashoggi also became an agent for Northrop in 1970, from which he is said to have been paid $54m. He was recommended to the company by Kermit Roosevelt, the grandson of Theodore, and a key player in the 1952 US-British coup that brought the Shah of Iran to power. #OpDeathEaters

Khashoggi is also known to have facilitated deals for UK firms, Marconi and Westland Helicopters, later swept by the Westland Affair that almost brought down PM Margaret Thatcher (who also covered up a prominent VIP paedosadist network). #OpDeathEaters https://www.theguardian.com/politics/2015/oct/05/margaret-thatcher-could-have-been-brought-down-by-westland-affair
Margaret Thatcher 'could have been brought down' by Westland affair

https://www.theguardian.com/politics/2015/oct/05/margaret-thatcher-could-have-been-brought-down-by-westland-affair
In 1994 there were allegations the UK got a multi-billion deal thanks to bribes to members of the Saudi government and royal family. Khashoggi claimed, his rival Wafic was using Mark Thatcher's intelligence to secure deal signed by his mom. #OpDeathEaters https://www.independent.co.uk/news/mark-thatcher-accused-sources-say-he-got-12m-pounds-from-arms-deal-signed-by-his-mother-1441851.html
Mark Thatcher accused: Sources say he got 12m pounds from arms deal

MARK THATCHER made millions of pounds from Britain's huge Al-Yamamah arms deal with Saudi Arabia, signed in 1985 by his mother, Margaret Thatcher, when prime minister, it is alleged today.

https://www.theguardian.com/politics/2013/apr/14/thatcher-knew-of-equatorial-giunea-coup-attempt
Khashoggi was a friend of Richard Nixon, he introduced him to influential individuals across the Middle East. Once Nixon was elected in 68, they continued private meetings and he funneled millions into Nixon’s re-election campaign in 71. #OpDeathEaters https://www.nytimes.com/1977/07/03/archives/khashoggi-the-bridge-to-arab-deals-khashoggithe-bridge-to-arab-arms.html 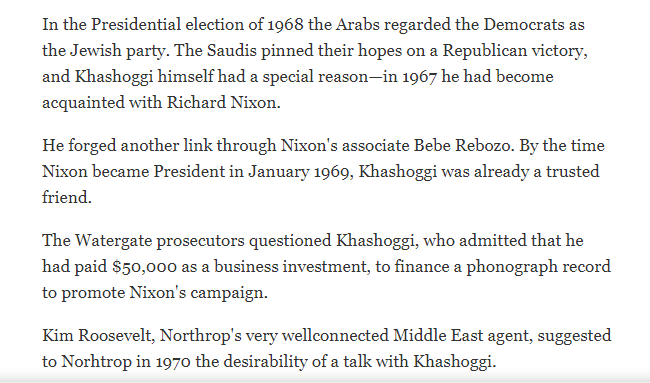 Khashoggi hosted some of the most extravagant parties in European history ... as well as wielding massive political clout in the US, Europe, and the Middle East. #OpDeathEaters https://www.vice.com/en_us/article/gq8ek9/inside-the-basement-of-arms-dealer-adnan-khashoggi-773