Read on Twitter
This is a thread about Trump’s relationship with the Jewish community & the Jewish state.

After seeing so many Jews say such horrible things about him, I decided to look further into Trump’s background to learn more about his feelings toward the Jews.

This is what I learned:
Let's start with the biggest influence in Donald Trump's life, his father.
Fred C. Trump welcomed plenty of Jewish tenants to his properties, and, perhaps, as a result of these relationships, Fred became a generous donor to Jewish and Israeli causes. https://www.breakingisraelnews.com/132138/why-many-believed-donald-trumps-father-fred-trump-jewish/
Donald Trump's Father was so Dedicated to Israel Causes, People Thought he was Jewish - Breaking...

In his book, The Art of the Deal, Trump, inaccurately claimed that he was of Swedish ancestry. Trump’s grandfather, Freidrich, was born in Bavaria

https://www.breakingisraelnews.com/132138/why-many-believed-donald-trumps-father-fred-trump-jewish/
Fred made generous donations to the Long Island Jewish Medical Center, supported Israel bonds, and served as the treasurer of an Israeli benefit concert. He was so active in Jewish causes that some believed that he belonged to the Jewish faith.

https://en.wikipedia.org/wiki/Fred_Trump .
In 1956, Fred Trump also donated land to the Talmud Torah of the Beach Haven Jewish Center in Flatbush, New York. The Center is still active today and offers programs for the youth and elderly, as well as an active synagogue. 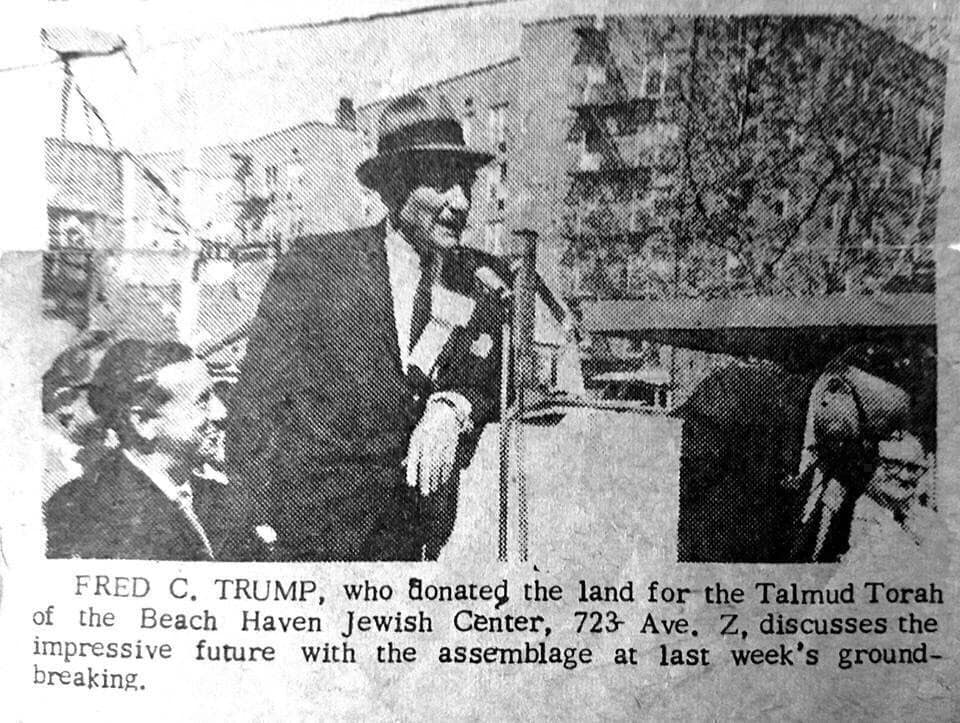 During the 1980's, Fred Trump became friends with the Israeli Ambassador to the United Nations in Manhattan at the time, Benjamin Netanyahu.

A plaque in the Beach Haven Building reads: 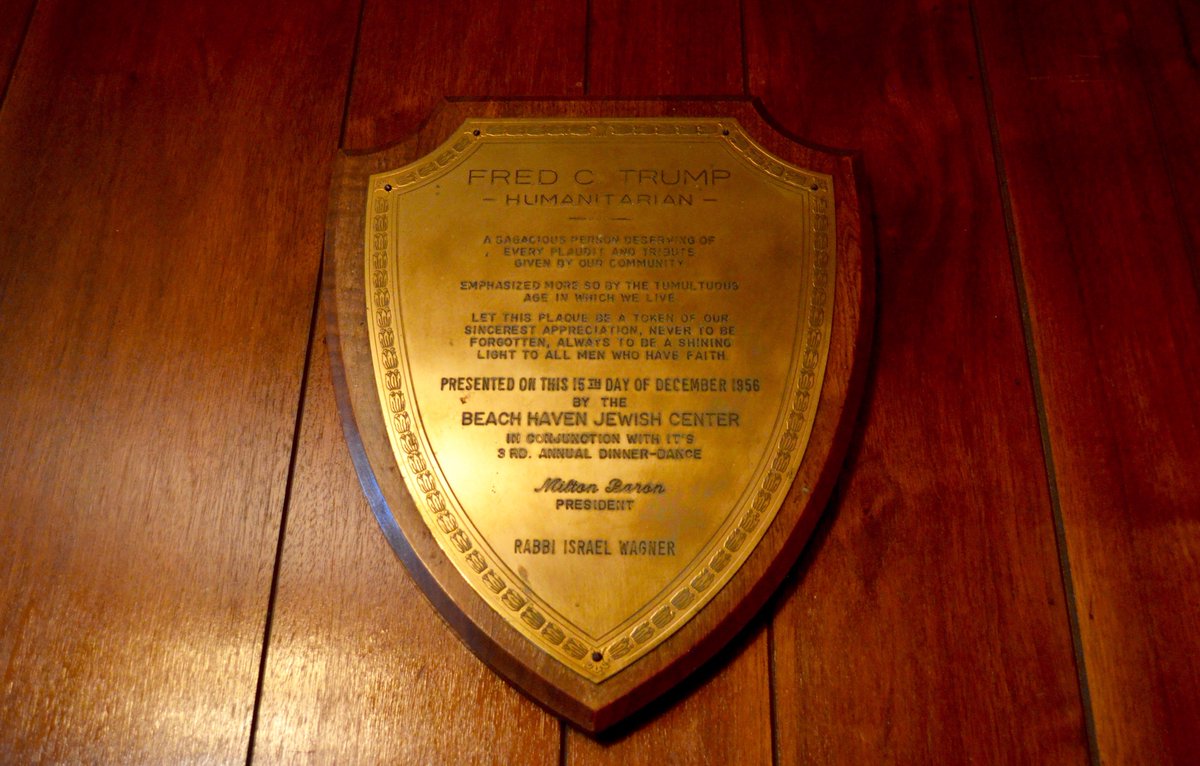 Donald Trump continued his father’s pattern of donating to Jewish & Israeli causes. In 1976, Trump received the Humanitarian Award from Jewish National Health, a Denver hospital doing research/treatment in respiratory & related disorders. https://www.nationaljewish.org/giving/get-involved/events/real-estate-construction-industries-dinner-dance/past-honorees
Past Honorees https://www.nationaljewish.org/giving/get-involved/events/real-estate-construction-industries-dinner-dance/past-honorees
In March 1983, Trump was awarded the prestigious “Tree of Life” award by the Jewish National Fund (JNF), an organization that raises money to finance large projects in Israel. 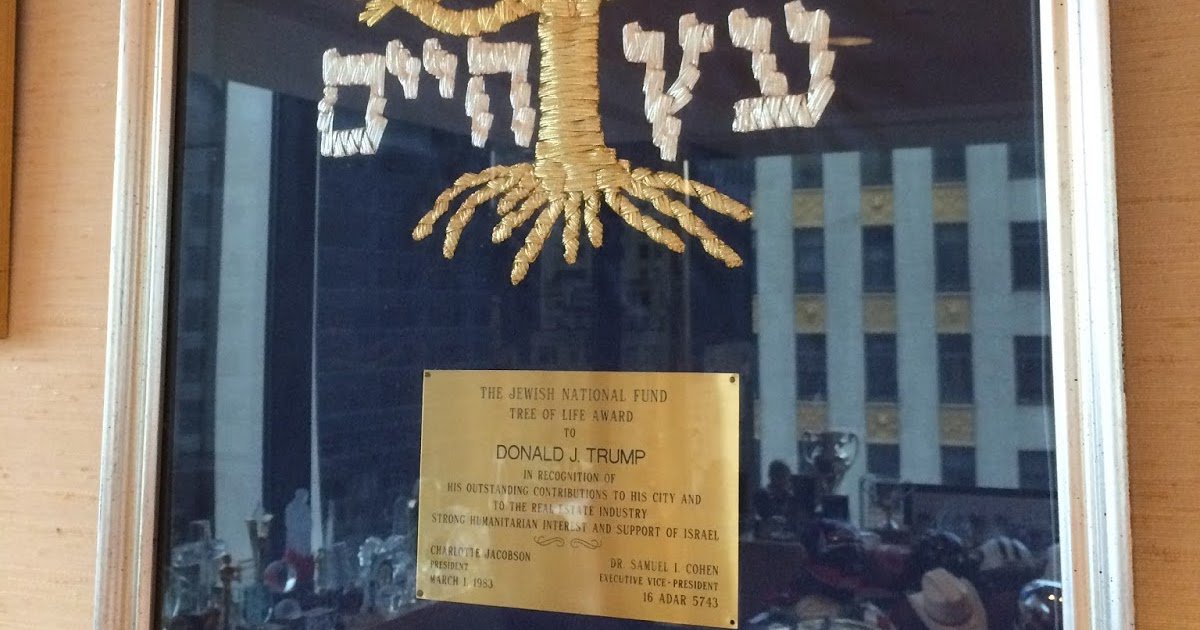 The award is the highest humanitarian award that honors individuals and families “in appreciation of their outstanding community involvement, dedication to the cause of American-Israeli friendship, and devotion to peace and the security of human life.” https://www.thegivingtrump.com/jewish-national-funds-covetous-award-tree-life-award-donald-trump-appreciation-outstanding-dedication-cause-american-israeli-friendship-support-o/
The Jewish National Fund's Most Covetous Award, the "Tree of Life Award", was Awarded to Donald...

Donald Trump had his wife, sister, brother, parents (Fred Trump who built thousands of Brooklyn homes over 40 years ago where Jews were the principal buyers) stand up for recognition.

https://www.thegivingtrump.com/jewish-national-funds-covetous-award-tree-life-award-donald-trump-appreciation-outstanding-dedication-cause-american-israeli-friendship-support-o/
JNF officials said that Trump was part of a consortium of donors involved in various projects in Israel, including financing a playground in the town of Yokneam and another in Sufa, a kibbutz in southern Israel. https://www.haaretz.com/us-news/.premium-inside-donald-trump-s-history-of-donations-in-israel-1.5469673
Inside Donald Trump's history of donations in Israel

https://www.haaretz.com/us-news/.premium-inside-donald-trump-s-history-of-donations-in-israel-1.5469673
Trump also donated to help build new infrastructure in the Israeli Negev for Jews from the Sinai that were forced to evacuate under the terms of Israel’s peace treaty with Egypt in 1979. https://www.ynetnews.com/articles/0,7340,L-4879458,00.html
Trump donated toward settlement evacuees

https://www.ynetnews.com/articles/0,7340,L-4879458,00.html
Trump's donations were used to build greenhouses, homes, and roads for evacuees. A plaque bearing Trump’s name in English and Hebrew appears on a wall in Moshav Dekel, in the Eshkol region, to honor all the donors that contributed to the resettlement. 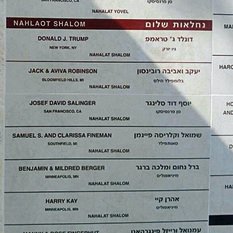 In 2003, Trump was part of a group of New York donors who gave to JNF to finance the construction of a reservoir in the western Negev.
In 2005, Trump also contributed toward the creation of new communities for Israelis were evacuated from the Gaza Strip. https://www.breakingisraelnews.com/78699/trump-reportedly-donated-israeli-evacuees-gaza/
Trump Reportedly Donated to Jews Expelled From Gaza Strip

President-elect Donald Trump reportedly contributed money to help create new communities in Israel for evacuees of settlements in the Sinai and Gaza Strip.

https://www.breakingisraelnews.com/78699/trump-reportedly-donated-israeli-evacuees-gaza/
Acc. to former JNF chairman Effie Stenzler, the Israeli govt requested assistance from Jewish orgs, like JNF, to help pay the costs of resettlement. JNF "sought donations in the U.S. and one of them was Trump, who is considered to be an avowed supporter of Israel," Stenzler said.
According to http://TheGivingTrump.com , in 1985, Trump was Chairman of JNF’s Annual Real Estate Divisions Dinner Dance where over $700K was raised, the largest fundraising affair ever for any JNF event. https://www.thegivingtrump.com/1985-trump-chairman-jewish-national-funds-annual-real-estate-divisions-dinner-dance-700k-raised-largest-fundraising-affair-ever-jnf-event/
In 1985, Trump was Chairman of the Jewish National Fund's Annual Real Estate Divisions Dinner-Dan...

Link to article  |  Archive  |  PDF The Tree of Life Award, the most prestigious award of the Jewish National Fund went to Benjamin D. Holloway, chairman and chief executive officer of Equitable Real...

http://TheGivingTrump.com
In the 1990’s, Trump tried to convert his Mar-a-Lago mansion in Palm Beach, FL into a country club, but the town council placed restrictions on his club. He filed a lawsuit claiming the council was discriminating against his club, partly b/c his club was open to Jews and blacks,
while other established clubs excluded Jews and blacks.

“The episode shook the Palm Beach establishment, unaccustomed to having its linen, dirty or not, aired publicly.”

I n posh Palm Beach, Donald Trump's freewheeling Mar-a-Lago Club is a saving grace, affronting hypocrisy in a corseted culture of snobs -- or else it's the town's vulgar future made unpleasantly...

He said he received calls from Jewish residents telling how Palm Beach clubs were changing & began to admit Jewish members.
In 2000, “Trump was recognized by UJA Federation of New York’s Hospitality Division for being an industry leader. He received the Hotel & Real Estate Visionary of the Century Award. He gave the org a $25,000 donation in 2012 and another $15,000 in 2014.” https://jewishweek.timesofisrael.com/trumps-jewish-giving-rubs-against-tenor-of-his-campaign/
Trump’s Jewish Giving Rubs Against Tenor Of His Campaign

Some see ‘disconnect’ between his sizeable contributions and views on minorities, immigrants, Israel.

https://jewishweek.timesofisrael.com/trumps-jewish-giving-rubs-against-tenor-of-his-campaign/
In addition, “Trump gave a $10,000 donation to the Museum of Jewish Heritage in 2003, according to spokeswoman Lisa Safir, and a gift in 2012 for general operating expenses amounting to $100,000, an amount which puts Trump’s name on the museum’s wall of contributors.”
“He has also been a regular contributor to Friends of Israel Defense Forces, acc to a spokesman. Trump’s son-in-law, Jared Kushner, is a member of that organization’s national board.”

A spokesman for the ADL said Trump had donated a total of $56,000 to the ADL since the 1970’s.
“In 2014, Trump donated $3,750 to the Institute for Jewish Humanities; $5,000 to the Jewish Community Relations Council of NY; $2,500 to the Gurwin Jewish Geriatric Center; and $18,000 to the American Friends of the Jaffa Institute, a nonprofit child welfare agency in Israel.”
In 2003, Trump donated $10,000 to American Friends of Beit El Institutions, a fund for religious institutions in the Jewish community of Beit El in Samaria. Trump made the donation in honor of his lawyer, David Friedman, who served as its President. https://www.haaretz.com/israel-news/.premium-trump-donated-10-000-to-west-bank-settlement-1.5475280
Trump donated $10,000 to West Bank settlement

https://www.haaretz.com/israel-news/.premium-trump-donated-10-000-to-west-bank-settlement-1.5475280
In 2004, Trump was chosen to be the grand marshal of the Salute to Israel Parade, which was the largest single gathering in support of Israel, with an estimated 1 million spectators, 40 floats, 16 marching bands and dozens of entertainers. https://twitter.com/realdonaldtrump/status/703711236865720320?lang=en

In 2006, Trump announced plans to build “Trump Tower Israel” in Ramat Gan, a city on the outskirts of Tel Aviv. The tower, the tallest in Israel when completed, was supposed to be a 70 story luxury apartment building. https://www.jpost.com/Real-Estate/Trump-Tower-Israel-takes-step-forward
'Trump Tower Israel' takes step forward

The planned building will be 70 floors high and will be comprised of "prestigious" luxury apartments. It will be the tallest tower in Israel once completed.

In 2008, Trump sent his daughter, Ivanka, to Israel to study the local real estate market. https://www.haaretz.com/israel-news/watch-ivanka-trump-visited-israel-in-2008-to-scout-investments-1.5472235
From our archives: When Ivanka Trump visited Israel in 2008 to scout real estate property

You can follow @DanFined.
Tip: mention @twtextapp on a Twitter thread with the keyword “unroll” to get a link to it.