By 2025 it will have spent $580B to make electricity nearly 2x more expensive & 10x more carbon-intensive than France’s.

Germans believed that the billions they spent on renewables would redeem them. Many of them will insist that the renewables effort was merely “botched,” but it wasn't. The Energiewende was doomed to...

https://www.forbes.com/sites/michaelshellenberger/2019/05/06/the-reason-renewables-cant-power-modern-civilization-is-because-they-were-never-meant-to/
It gets worse. In order to prevent electricity prices from rising further, or becoming overly dependent on Russian natural gas, Germany will next year destroy the ancient Hambach forest in order to mine the dirty brown coal underneath it. https://www.reuters.com/article/us-rwe-lignite-hambach/german-state-says-hambach-forest-will-not-be-touched-until-2020-idUSKCN1Q91M4
German state says Hambach forest will not be touched until 2020

German utility RWE has given assurances it will not touch a forest it had hoped to clear for lignite mining until late 2020, the premier of North Rhine-Westphalia state said on Wednesday, amid a...

https://www.reuters.com/article/us-rwe-lignite-hambach/german-state-says-hambach-forest-will-not-be-touched-until-2020-idUSKCN1Q91M4
Now, it is threatening to destroy “a mystical place full of giant, gnarled, centuries-old trees, rare animals and fabulous castles... the home of the Brothers Grimm's fairy tales & the oldest nature reserve in Germany.”

Wind power has its drawbacks, especially in central German region of Hesse, where developers want to erect generators in wooded areas like the Reinhardswald, of Brothers Grimm fame.

“‘It makes no sense at all. It's the headlong and forced adoption of wind power no matter the consequences... all this from the Green Party. That's astonishing’”
Now, scientists in Germany say wind turbines are contributing significantly to the “insect die-off.”

In many countries, wind turbines pose the single greatest threat to endangered bird and bat species.

https://www.forbes.com/sites/michaelshellenberger/2019/06/26/why-climate-activists-threaten-endangered-species-with-extinction/
The problem with nuclear is that it demands neither the radical remaking of society nor the fantasy of harmonizing with nature

No wonder they hate it so much https://www.forbes.com/sites/michaelshellenberger/2019/02/14/the-real-reason-they-hate-nuclear-is-because-it-means-we-dont-need-renewables/
The Real Reason They Hate Nuclear Is Because It Means We Don't Need Renewables

The problem with nuclear energy is that it doesn’t demand the radical re-making of society, like renewables do. All nuclear does is pay above average wages, decarbonize electricity, and produce cheap...

- Cost of taking down old wind turbines not included in cost of wind energy, unlike with nuclear plants

Offshore wind is the renewable-energy industry’s shiny new toy. Led by New York, seven Atlantic-coast states have now imposed mandates to expand offshore wind use over the next decade, with the

https://nypost.com/2020/07/30/offshore-wind-power-vast-boondoggle-that-ny-can-no-longer-afford/amp/
Nobody is more alienated from the natural world than environmentalists. You have to believe that the air above us is empty of life to imagine nothing will be killed by sticking giant spinning blades into the sky

For starters, using twitter to claim modern civilization is broken
Everything they say about renewables is wrong

https://quillette.com/2019/02/27/why-renewables-cant-save-the-planet/
Why Renewables Can’t Save the Planet - Quillette

When I was a boy, my parents would sometimes take my sister and me camping in the desert. A lot of people think deserts are empty, but my parents taught us to see the wildlife all around us, includ...

https://quillette.com/2019/02/27/why-renewables-cant-save-the-planet/
And please consider a donation to @Quillette

It's the most interesting magazine in the world right now 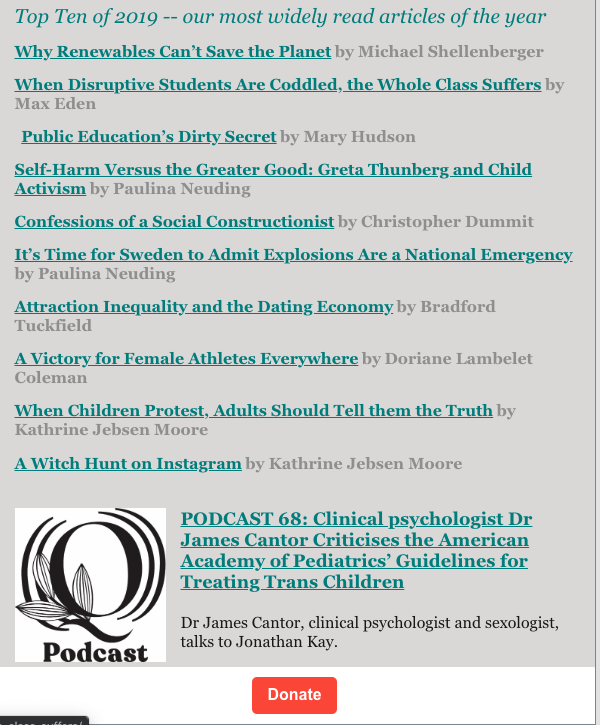