Read on Twitter
Indian media needs half a dozen journalists and ground reporters like @swati_gs. Just half a dozen.

Then watch how these gangrenous, scaremongering, utterly mediocre selactivists who currently manage to run fake narratives and hate trackers run for cover.

Just half a dozen.
"Leave our area, you Hindus."

Meticulously detailed and objective ground report by @swati_gs. Very distressing to read, but read it must be. https://swarajyamag.com/politics/leave-our-area-you-hindus-mob-lynches-father-for-police-complaint-on-his-minor-daughters-abduction-in-up
‘Leave Our Area, You Hindus’ Mob In UP Lynches Father For Filing Police Complaint On His Minor...

Man lynched to death for complaining about his minor daughter’s kidnapping.

This follows eye-witnesses rubbishing a Madrasa teacher's claim that he was beaten and forced to chant Jai Shri Ram.

A new template has been found. (image via @swati_gs) 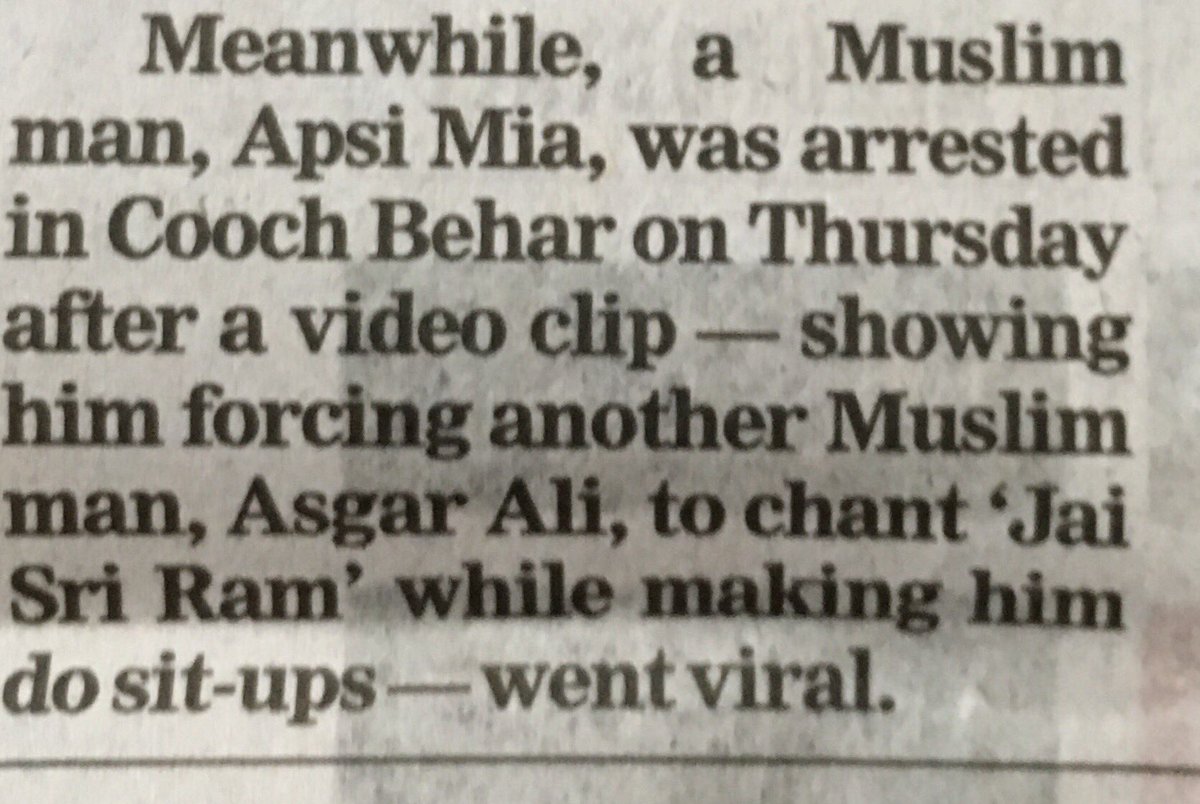 Now imagine a scenario where a Hindu mob vandalised a mosque in Delhi while chanting Jai Shri Ram & Har Har Mahadev. How would the media have reacted? https://twitter.com/swati_gs/status/1145637134373490690

"Hindus are 5% while the Muslims are 95% in this locality; if there was Hindu unity, would they have broken our temple?"

Hindus, who have been outnumbered in the area, are living in fear of future violence by the Islamist mob.

https://swarajyamag.com/politics/allahu-akbar-modi-murdabad-when-a-sloganeering-mob-pelted-stones-at-hindu-homes-desecrated-temple-abducted-minor-boy
The rise of the 'revenge mob' attack. Brilliant deep-dive by the incomparable @swati_gs, where she explores this recent troubling phenomena by talking to both sides of the divide. Journalism like how it used to be. https://swarajyamag.com/politics/the-rise-of-revenge-mob-attacks-and-how-to-deal-with-it
The Rise Of ‘Revenge Mob’ Attacks And How To Deal With It

Revenge mob attacks have increased — why and how should the police and state deal with it?

https://swarajyamag.com/politics/the-rise-of-revenge-mob-attacks-and-how-to-deal-with-it
Ignored by our media, it is left to @swati_gs to report on the lynching of innocents at the hands of the cattle-smugglers, the so-called Beef Mafia. 20 in just this past year.

These lives don't count. And neither do these deaths. They enter no database. https://swarajyamag.com/politics/since-2018-at-least-20-people-have-been-killed-by-cattle-thieves
Since 2018 At Least 20 People Have Been Killed By Cattle Thieves

Farmers, policemen and saadhus are being killed by the beef mafia. Is there anyone to outrage about this?!

https://swarajyamag.com/politics/since-2018-at-least-20-people-have-been-killed-by-cattle-thieves
Where the inimitable @swati_gs meticulously and BRILLIANTLY exposes yet another fraud.

This is an ESSENTIAL read, because it tells you the lengths to which these vipers with brimming poison-sacks will go to peddle their fake-narratives.

BRAVO, Swati. https://swarajyamag.com/ideas/what-reporting-on-the-begusarai-dalit-atrocity-case-has-told-me-about-the-english-media
What Reporting On The Begusarai Dalit Atrocity Case Has Told Me About The English Media

What it means to report on Muslim-on-Dalit atrocities and how the English media avoids it.

https://swarajyamag.com/ideas/what-reporting-on-the-begusarai-dalit-atrocity-case-has-told-me-about-the-english-media
The woman who moved a mountain. A mountain of lies, selectivity, bigotry, and hate.

Congratulations, @swati_gs, for SINGLEHANDEDLY demolishing the hateful tracker. No praise is high enough for your perseverance and dedication.
The Muslim mob mercilessly thrashed Bharat Yadav, calling him a Kaffir again and again. Then they lynched him.

But his death does not matter. Because he was a Hindu lynched by a Muslim mob.

Why are these two cases being treated differently?

https://swarajyamag.com/politics/you-know-tabrez-ansari-do-you-know-bharat-yadav
"Every year, a line is drawn on either side of the mosque to define the no-go area for the Durga idol."

This ground-report on the Balrampur attack firmly establishes @swati_gs as one of the finest journalists working today. Breathtakingly objective. https://swarajyamag.com/politics/ground-report-at-heart-of-attack-on-balrampur-durga-puja-procession-a-border-that-divides-two-communities
Ground Report: At Heart Of Attack On Balrampur Durga Puja Procession, A ‘Border’ That Divides Two...

This bigotry seems to have sanction from the administration.

https://swarajyamag.com/politics/ground-report-at-heart-of-attack-on-balrampur-durga-puja-procession-a-border-that-divides-two-communities
You can follow @ARanganathan72.
Tip: mention @twtextapp on a Twitter thread with the keyword “unroll” to get a link to it.