Read on Twitter
It should not be forgotten that Prince Charles's friend, the pervert Bishop Ball, also featured in the case of the Satanist Derry Mainwaring Knight: 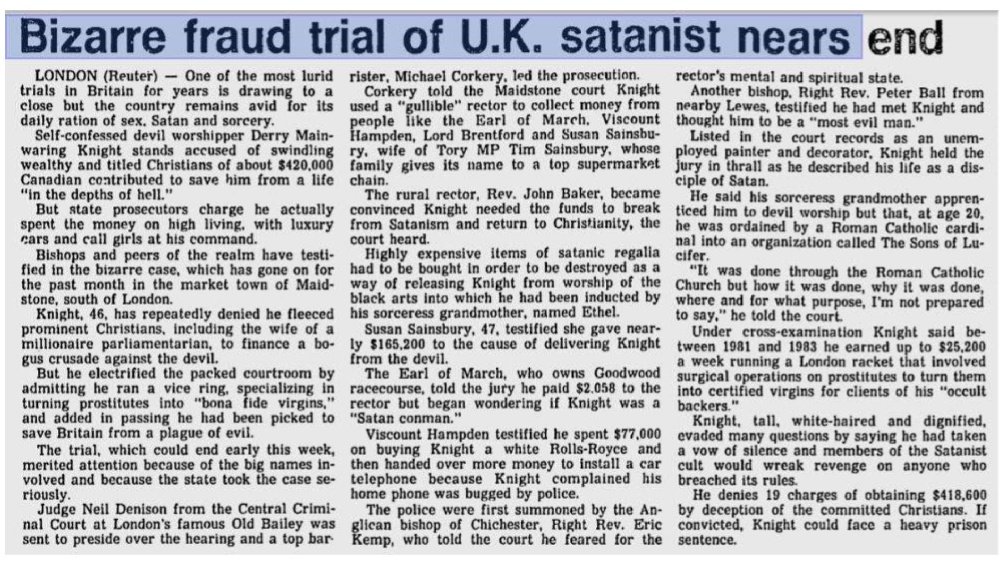 In fact, in 1983 the Right Irreverend Peter Ball of Lewd wrote a letter on Derry Mainwaring Knight’s behalf, requesting donations for his “necessary work”. 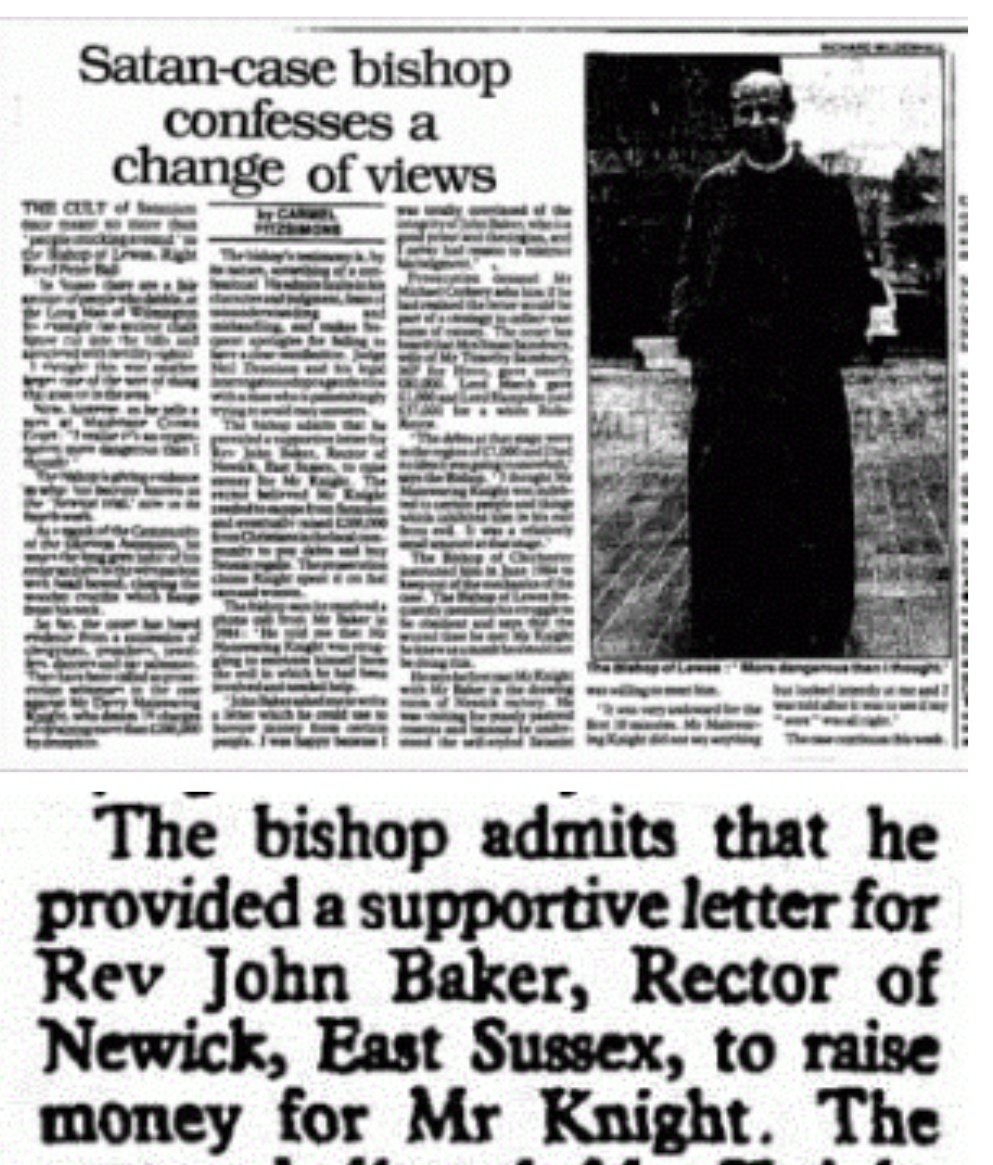 Bishop Ball was acting at the request of a gullible rector requested by Mainwaring Knight to collect money from the rich and famous: 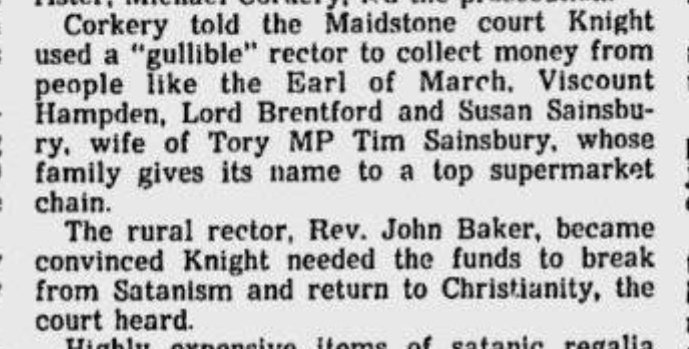 One such donor was Susan Sainsbury of the eponymous supermarket clan: 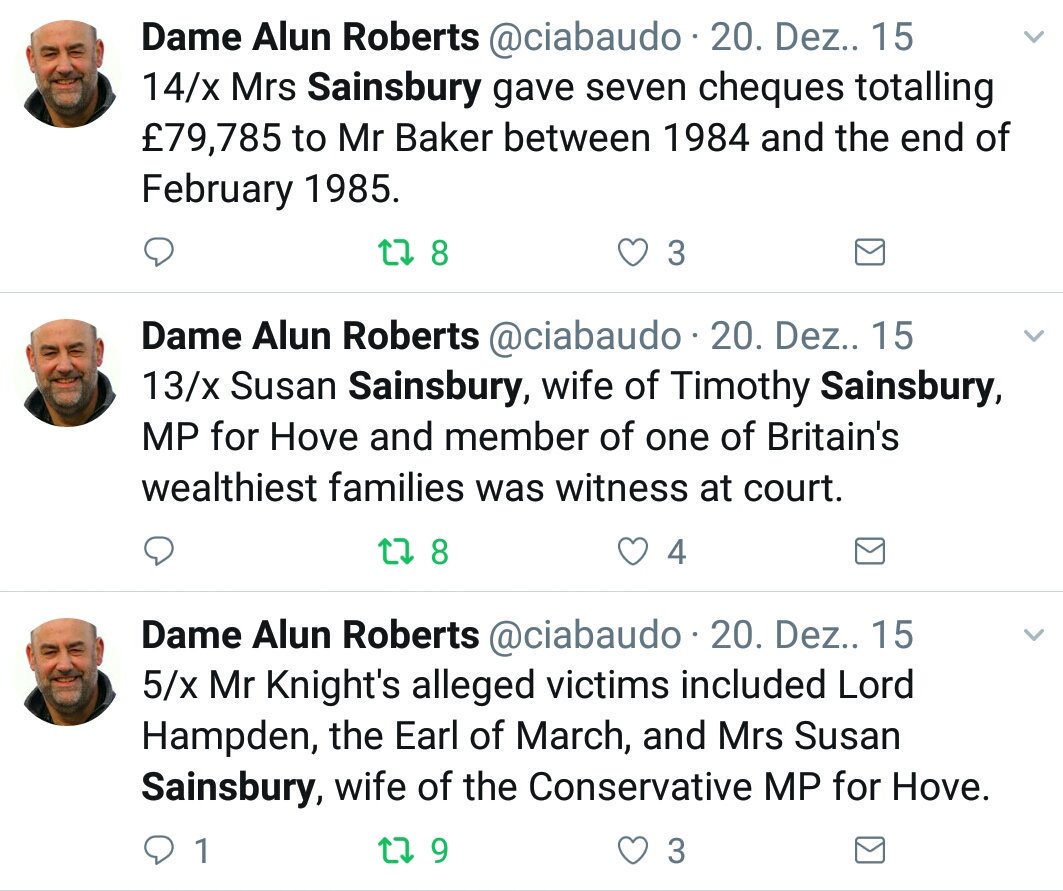 Robert Butler-Sloss, son of the Sloshed Butler put forward by the Establishment as a safe pair of hands to run IICSA, married Sarah Sainsbury, daughter of John Davan Sainsbury.
Shaun Woodward, friend of Esther Rantzen, married Camilla Sainsbury, daughter of former Conservative MP Tim Sainsbury. After leaving his wife, Woodward was reported to be in a relationship with Luke Redgrave, grandson of the actor Sir Michael Redgrave.
How did Derry Mainwaring Knight manage to get such ridiculously large sums of money out of titled, wealthy people…? I have often wondered if Knight was blackmailing these people and they were paying for his silence.
Given the royal family's extremely close links to the Sainsburys, it is highly unlikely that Prince Charles would be unaware of Peter Ball's involvement in the Derry Mainwaring Knight case ... 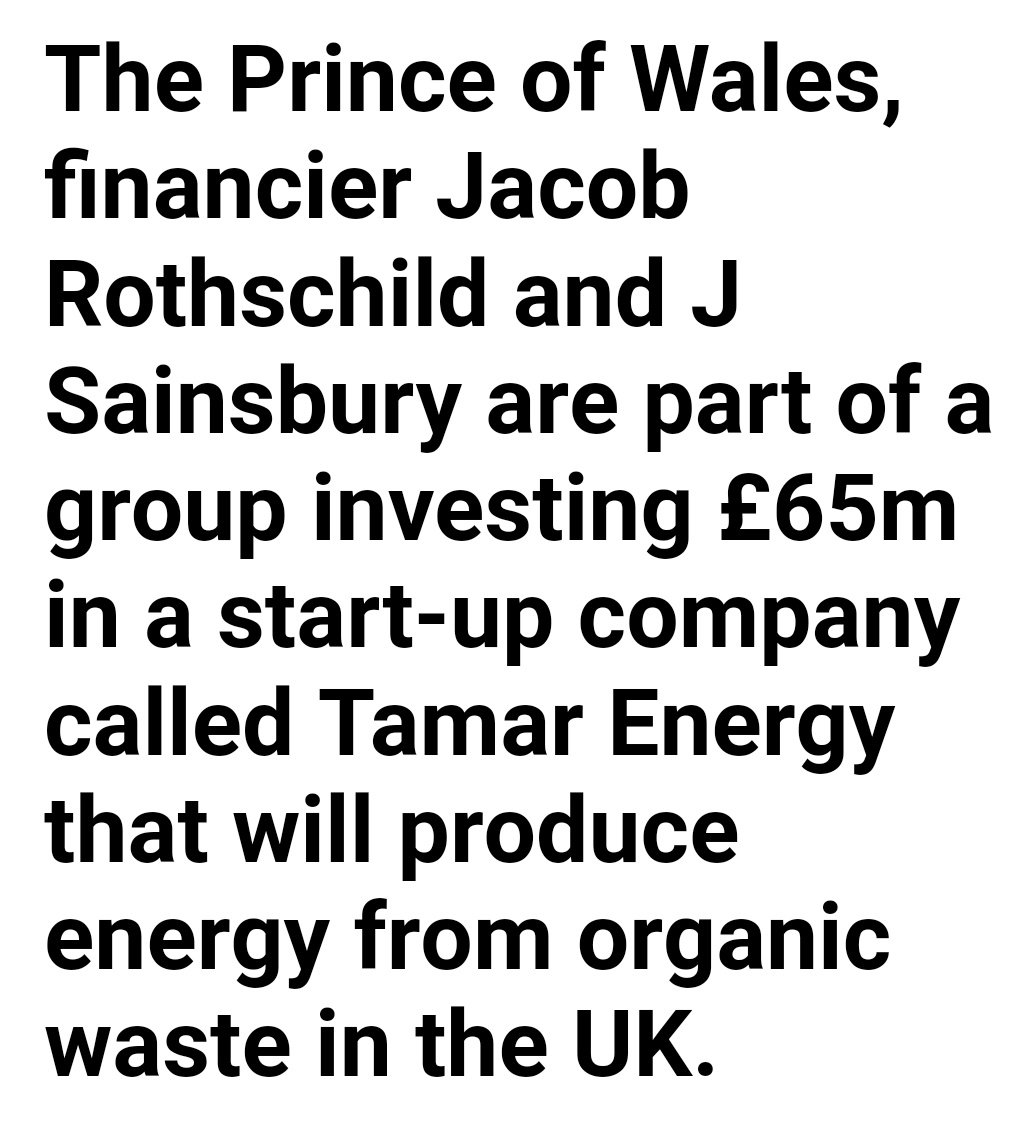 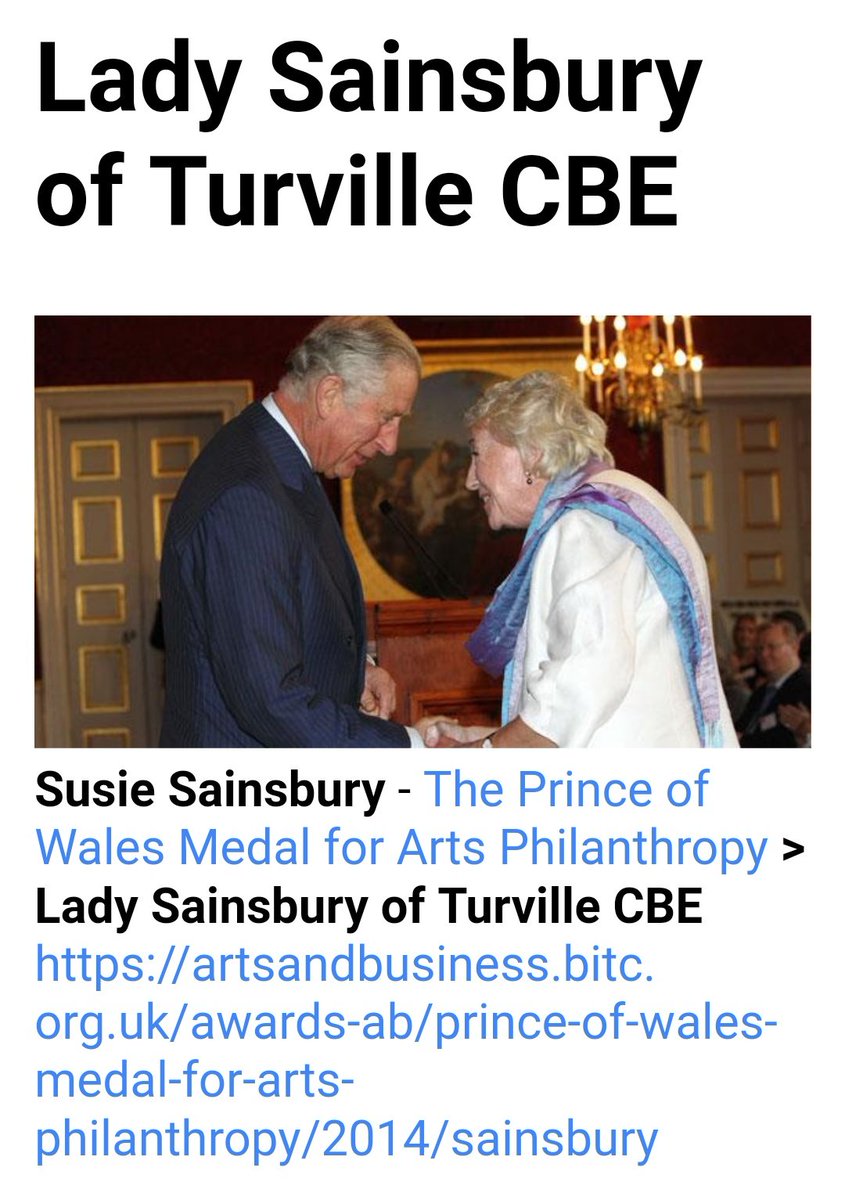 When night falls on Dartmoor owned by the Duchy of Cornwall ...
http://www.westcoast-news.org/story-satanists.htm 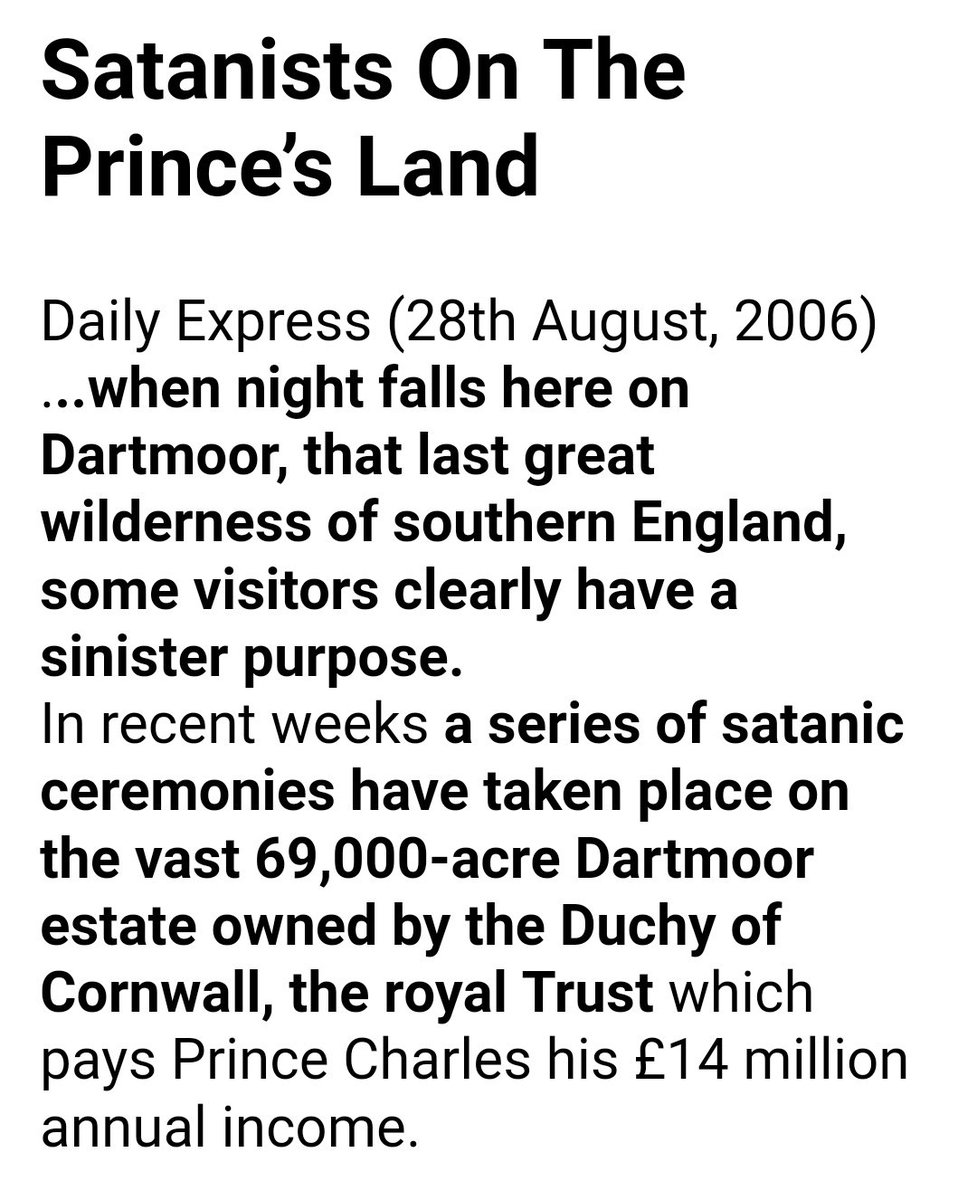 Here's the Prince neatly juxtaposed in a newspaper right next to an article about Derry Mainwaring Knight ... 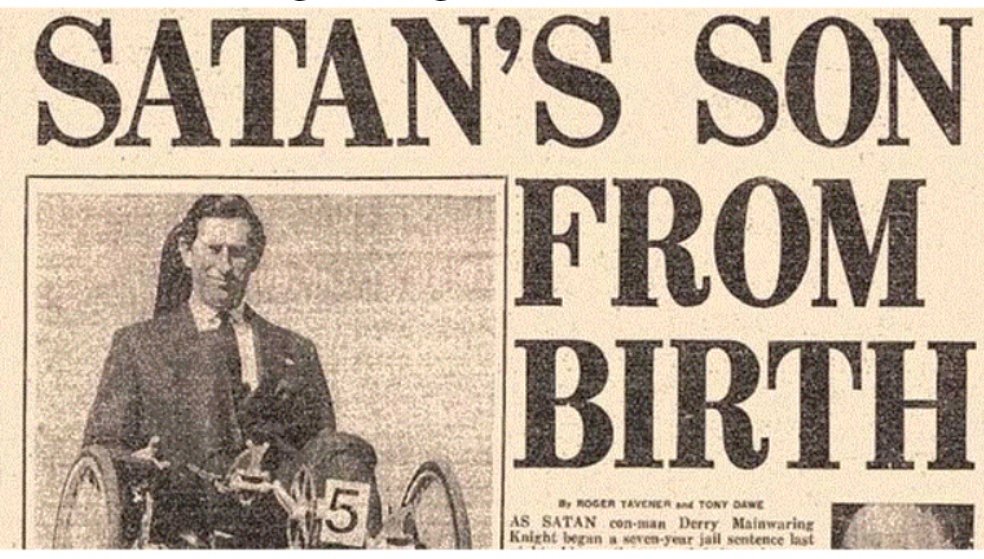 Would this by any chance explain why Baker/Ball turned to Sue Sainsbury for a donation for Mainwaring Knight?
Sainsbury - Gatsby - BASW - Peter Righton ... 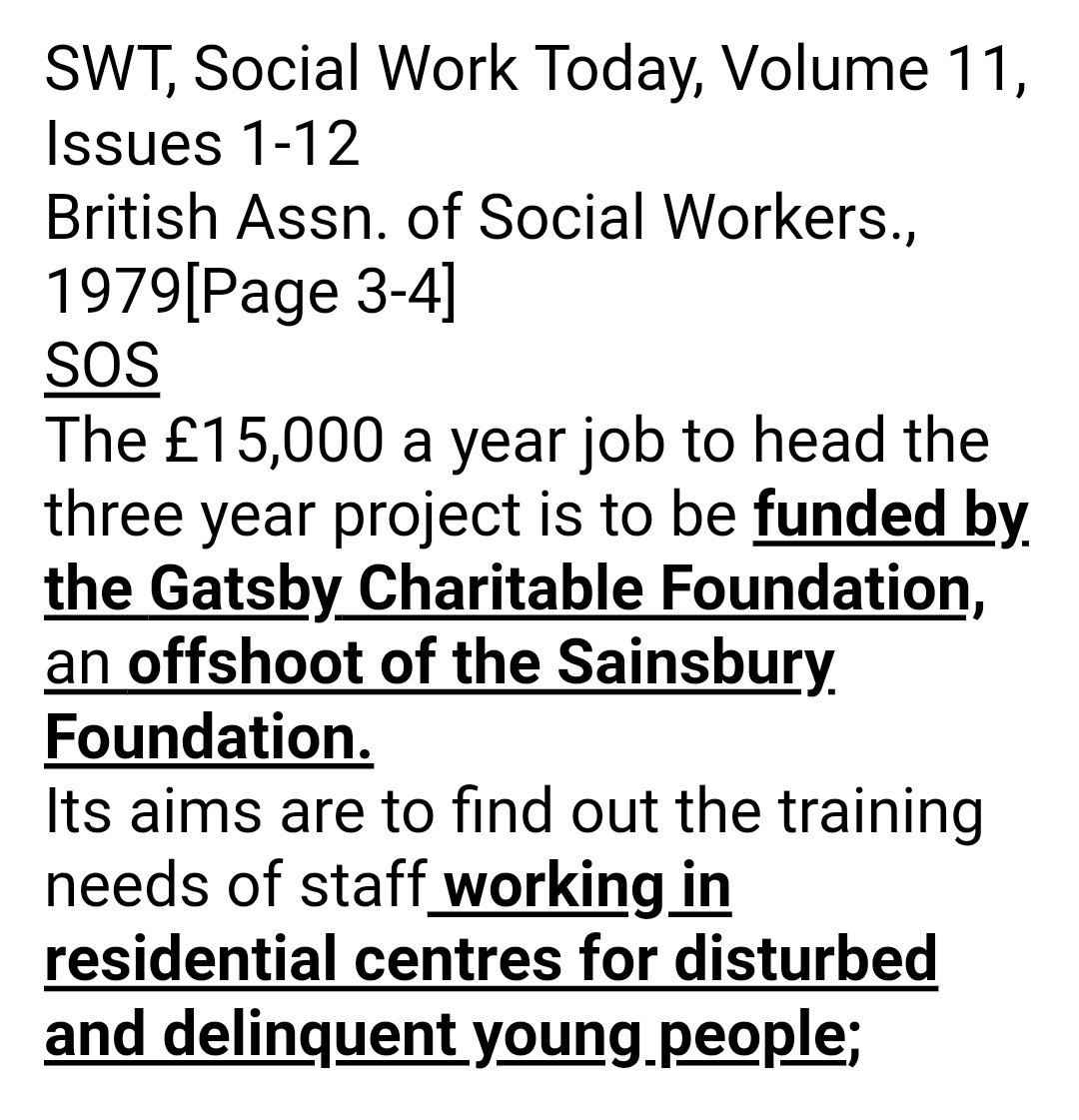 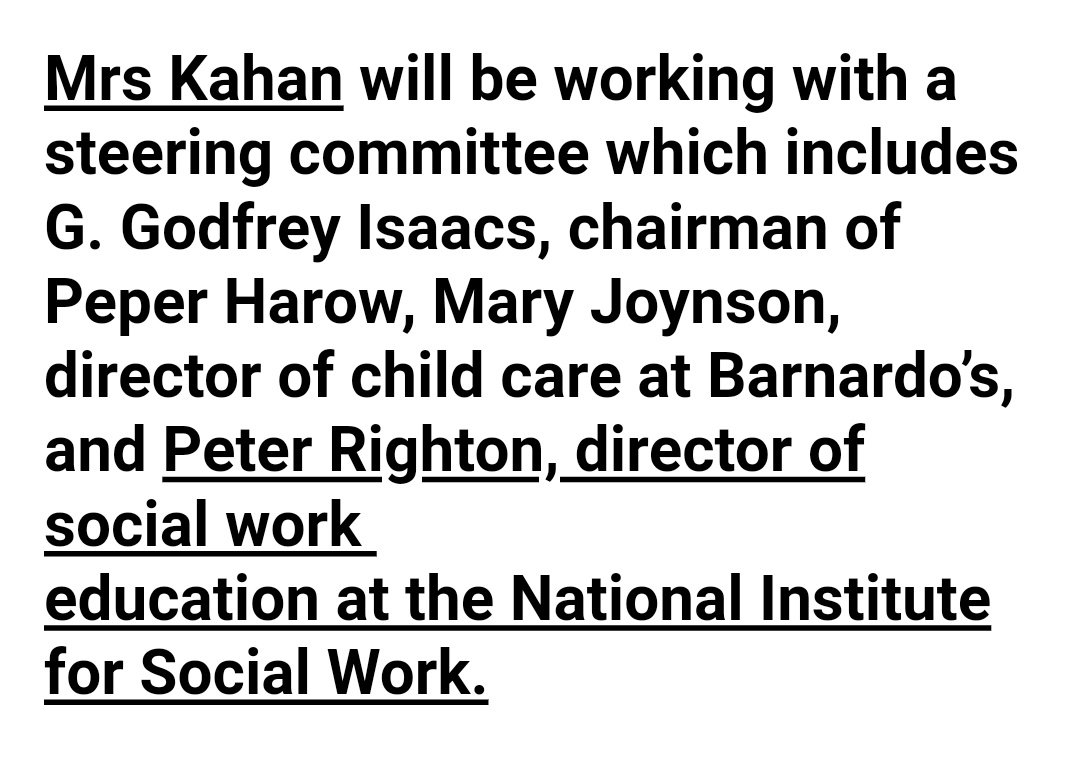 Peter Righton was of a close associate of Nick Stacey, a man of God, who played a central role in the protection of paedophiles. As Director of Social Services, he instructed his staff not to report alleged paedophiles within Kent Social Services. http://www.bbc.com/news/uk-40547383
Abuse claims 'were never reported'

The Reverend Nicolas Stacey said children in care were "incredibly manipulative", in a newly-discovered interview.

http://www.bbc.com/news/uk-40547383
On the face of it, the Gatsby Project, a distance learning project for residential child care workers, was a good thing – except that it was carried out with Peter Righton, who was an active member of PIE and was convicted of possessing child abuse images in the early 90s.
The Sainsburys also backed the Tear Fund, a Christian relief organisation closely associated with Cliff Richard, a man accused of child abuse whose name appeared as a patron of the Elm Guest House child brothel. 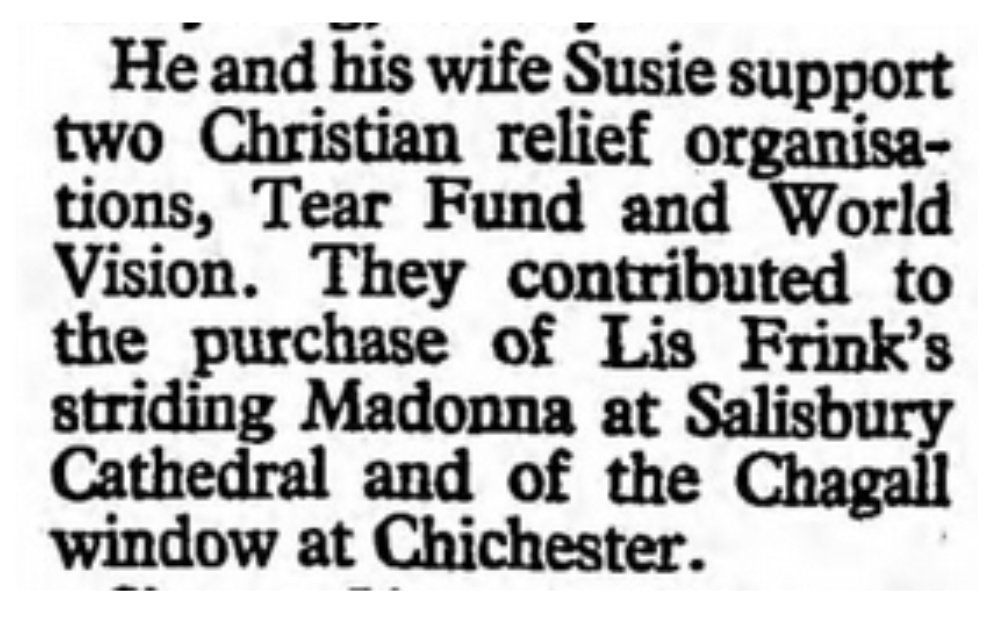 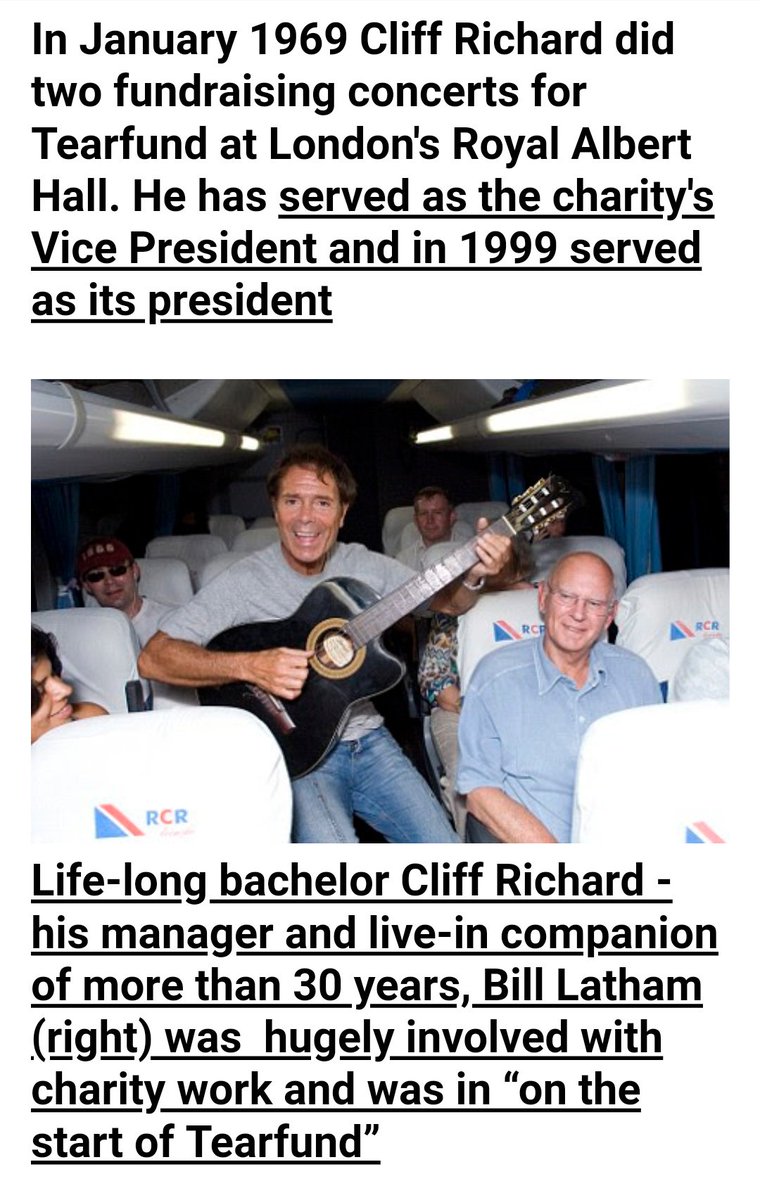 All for the love of Vaz:
The Sainsburys were also close to Keith Vaz, a man who rarely fails to get a mention in threads of mine. This time the link is Auchi, a man guilty of fraud whose extradition Vaz tried to prevent:
https://www.theguardian.com/politics/2001/may/27/election2001.labour
https://www.mirror.co.uk/news/uk-news/married-mp-keith-vaz-tells-8763805 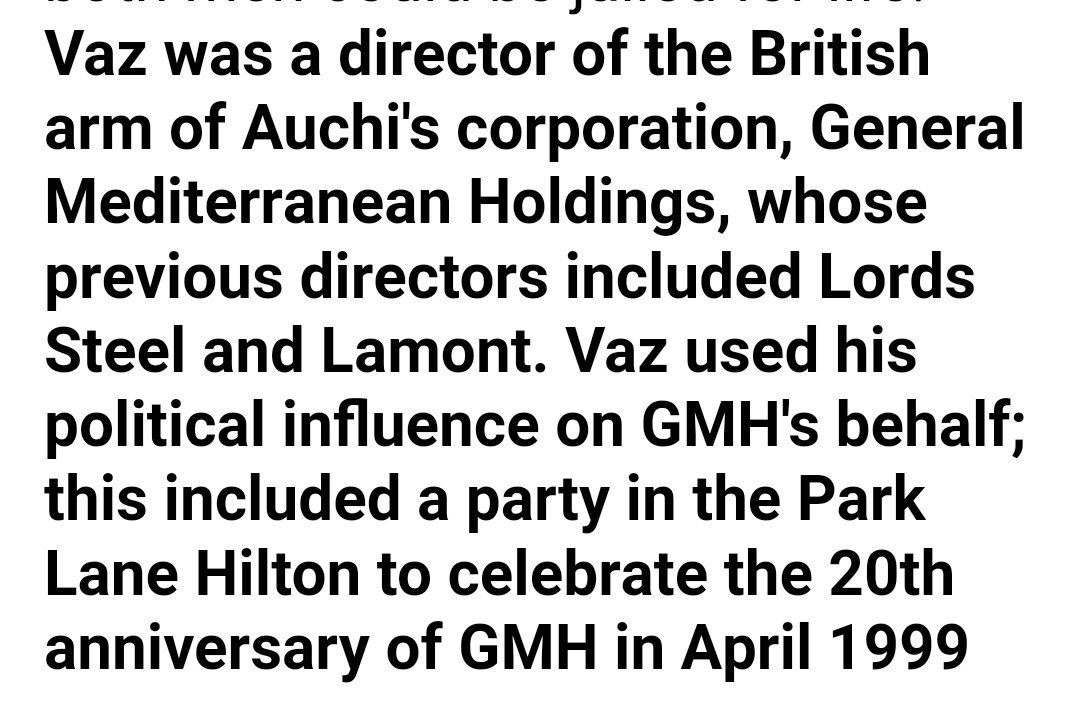 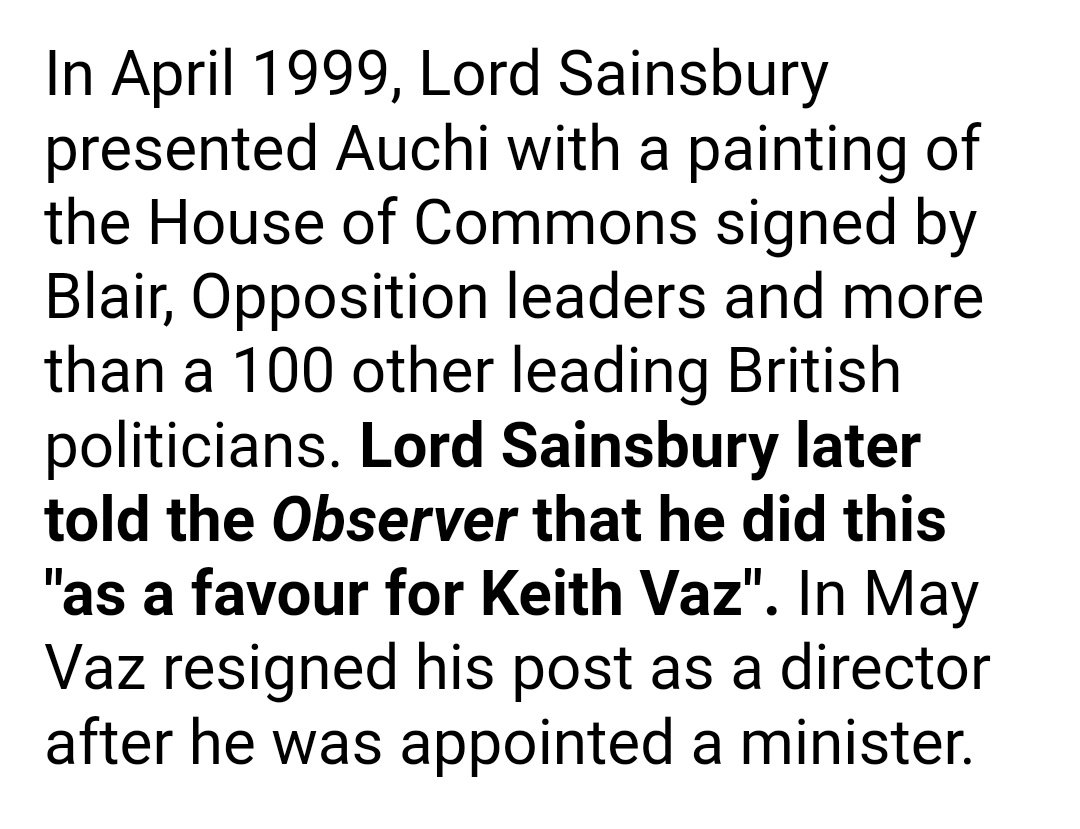 It would appear that Nick Stacey turned first to the Sainsburys for funding: 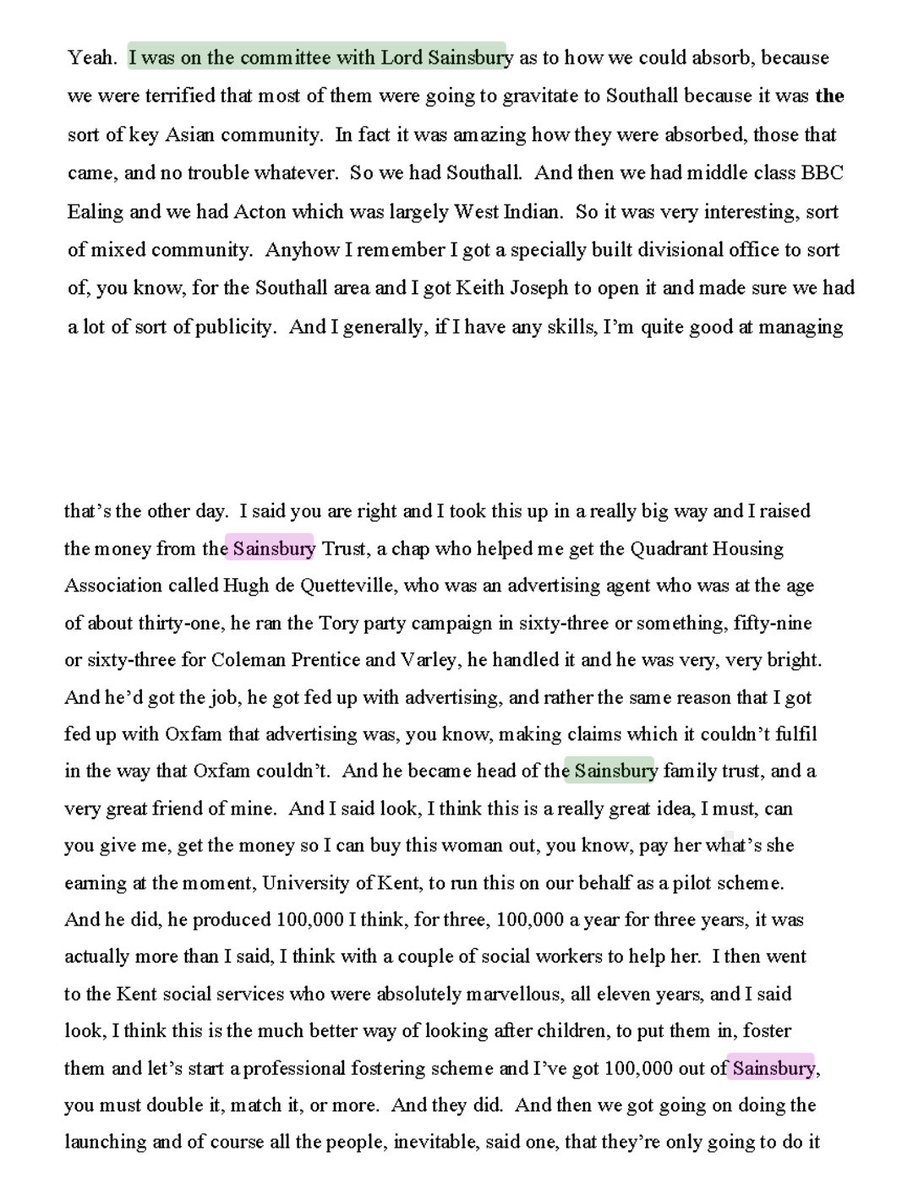 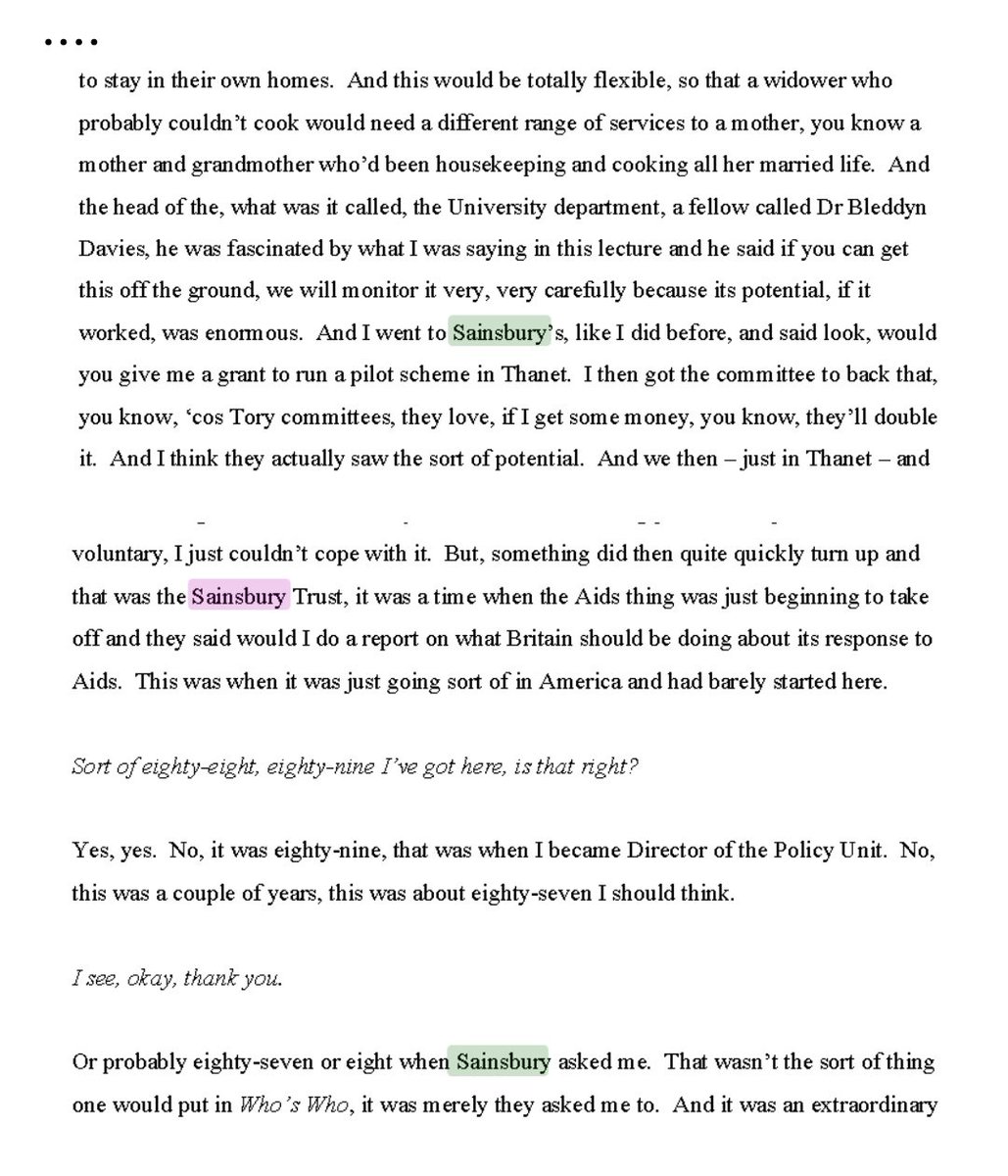 Stacey married an aristocrat, partly explaining his contacts and support: 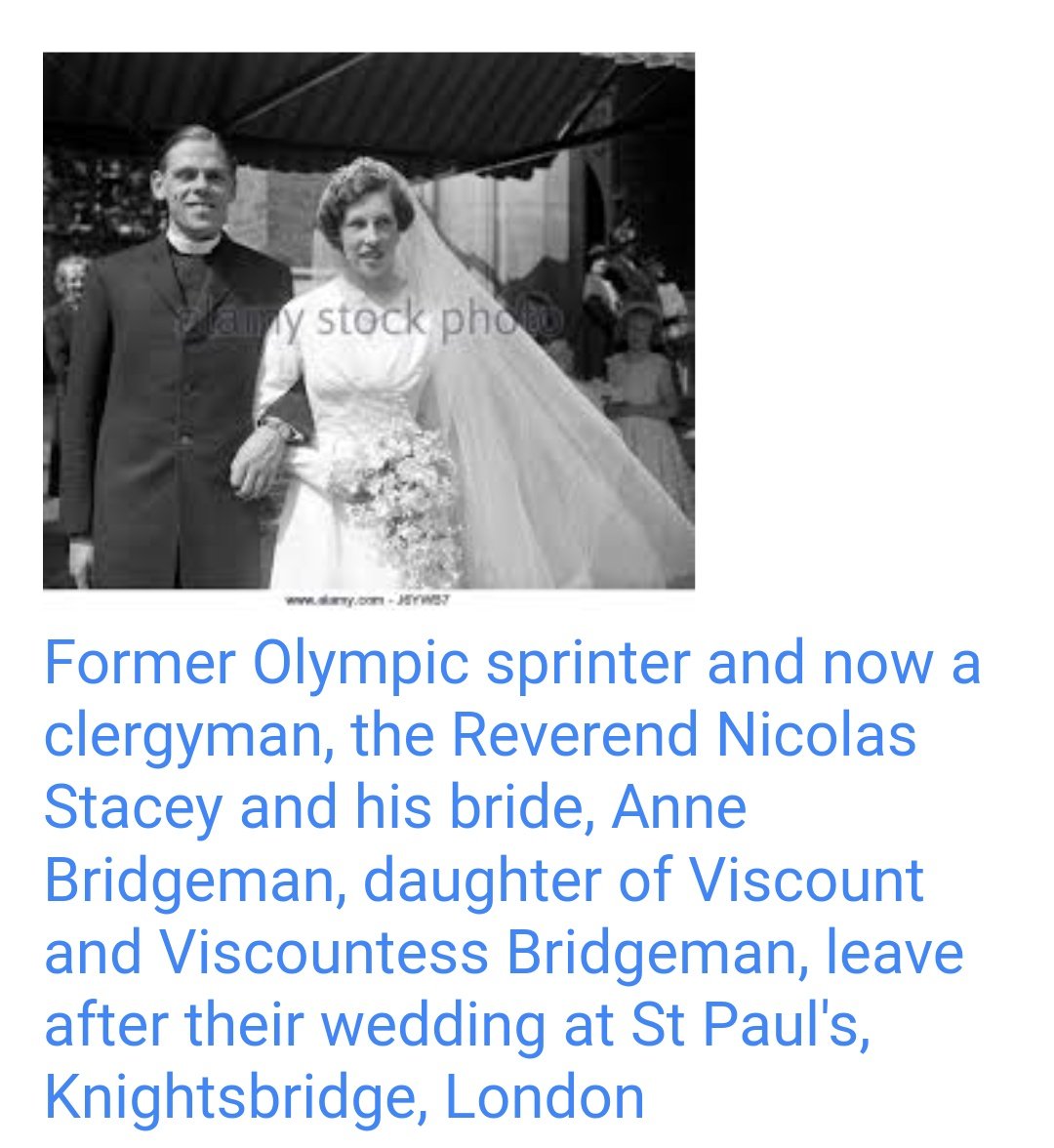 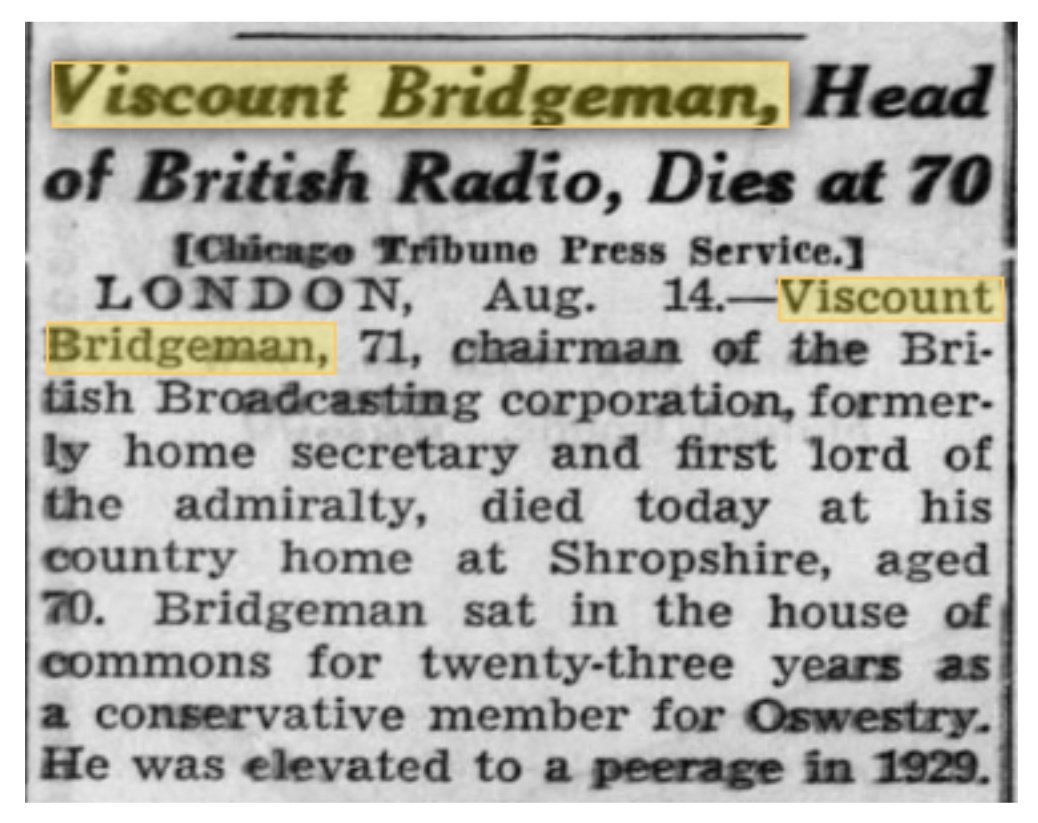 The Sainsburys and Greville Janner seem to have a lot in common, too.
Both were heavily involved in the HET (Holocaust Educational Trust).
Sainsbury was also President and donor of the Conservative Friends of Israel.
https://www.middleeastmonitor.com/20150302-inside-conservative-friends-of-israel/
MP Shaun Woodward, who married into the Sainsbury dynasty, and his wife Camilla both appeared in Jeffrey Epstein's little black book. 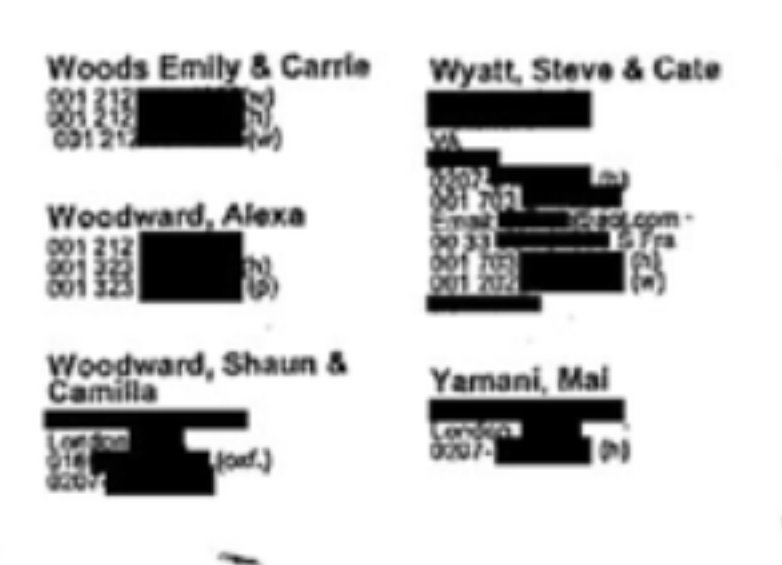 Dr. Coggan at the consecration of three new bishops. One is the pervert Bishop Ball and another was bursar at the Mirfield Community of the Ressurection paedo-incubator where Theresa May's father Hubert Brazier trained. https://theswamp.media/theresa-may-s-father 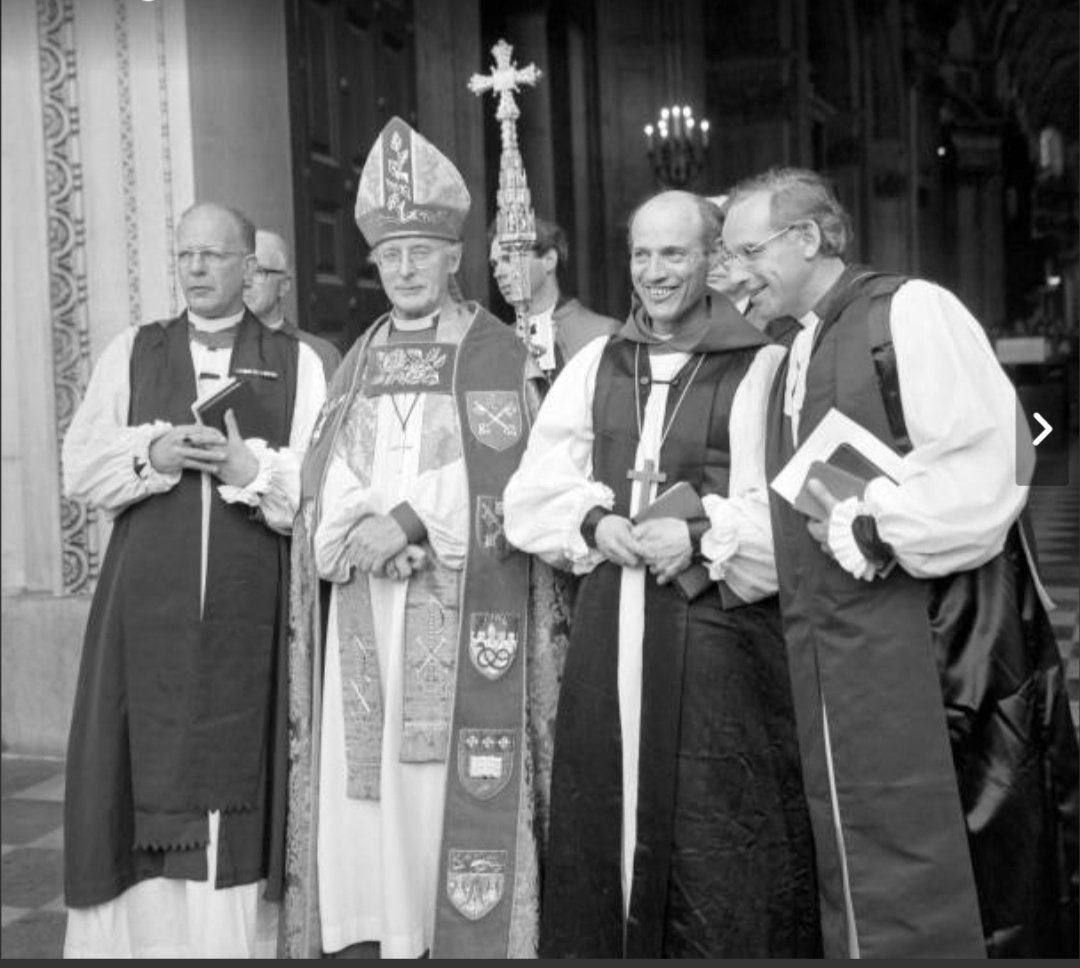 Nick Stacey was extremely well connected (not that it always made much difference). He was even a patron of the Terrence Higgins Trust along with many of the usual suspects ... http://archive.li/ysIFR#selection-543.0-543.37 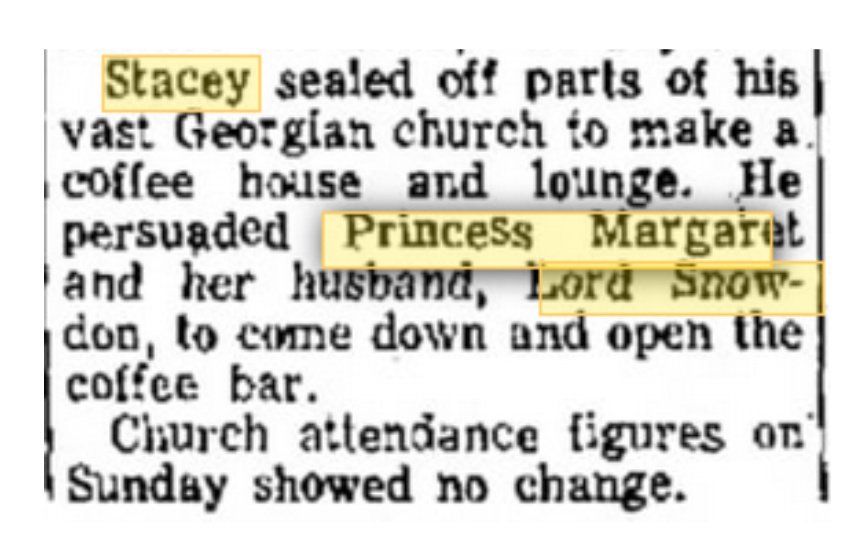 Bishop Ball's correspondence is proof of a very close relationship with Enoch Powell and his wife Pam.
Now remind me once again who Enoch's two camp aides were? 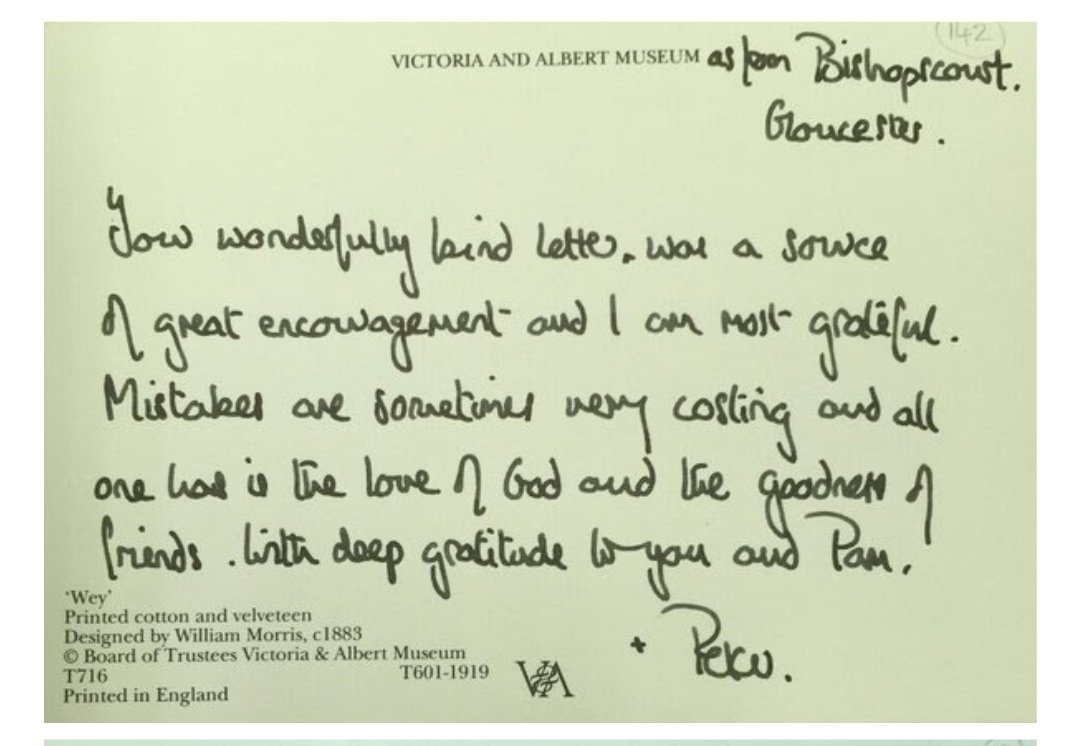 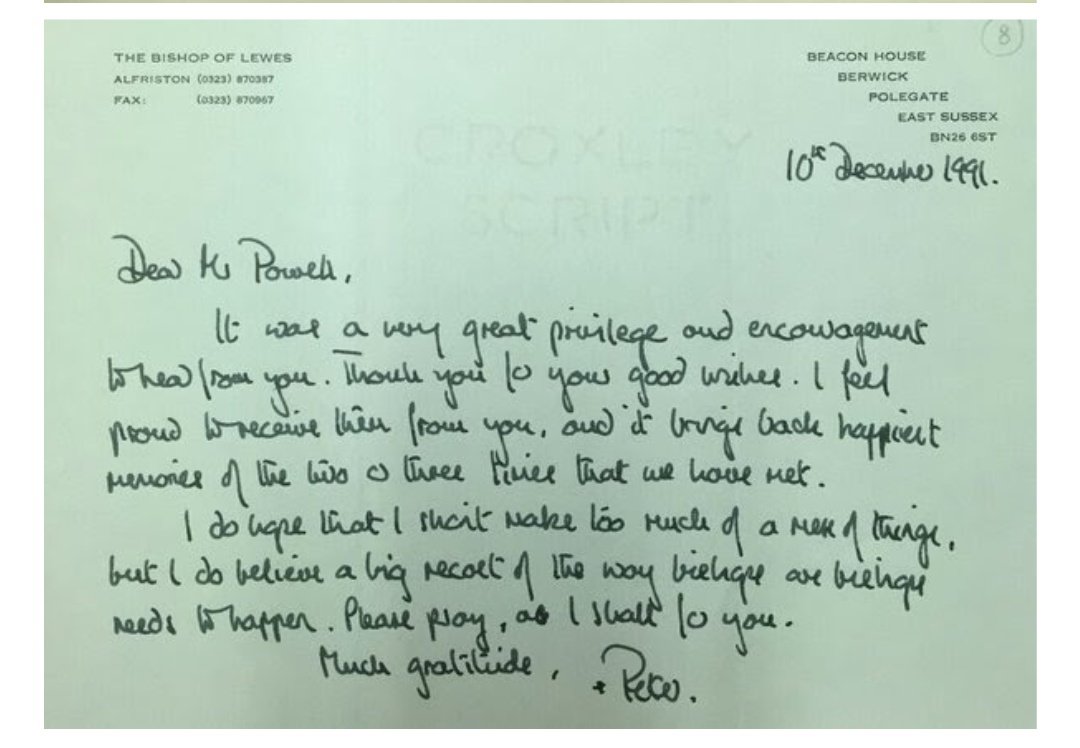 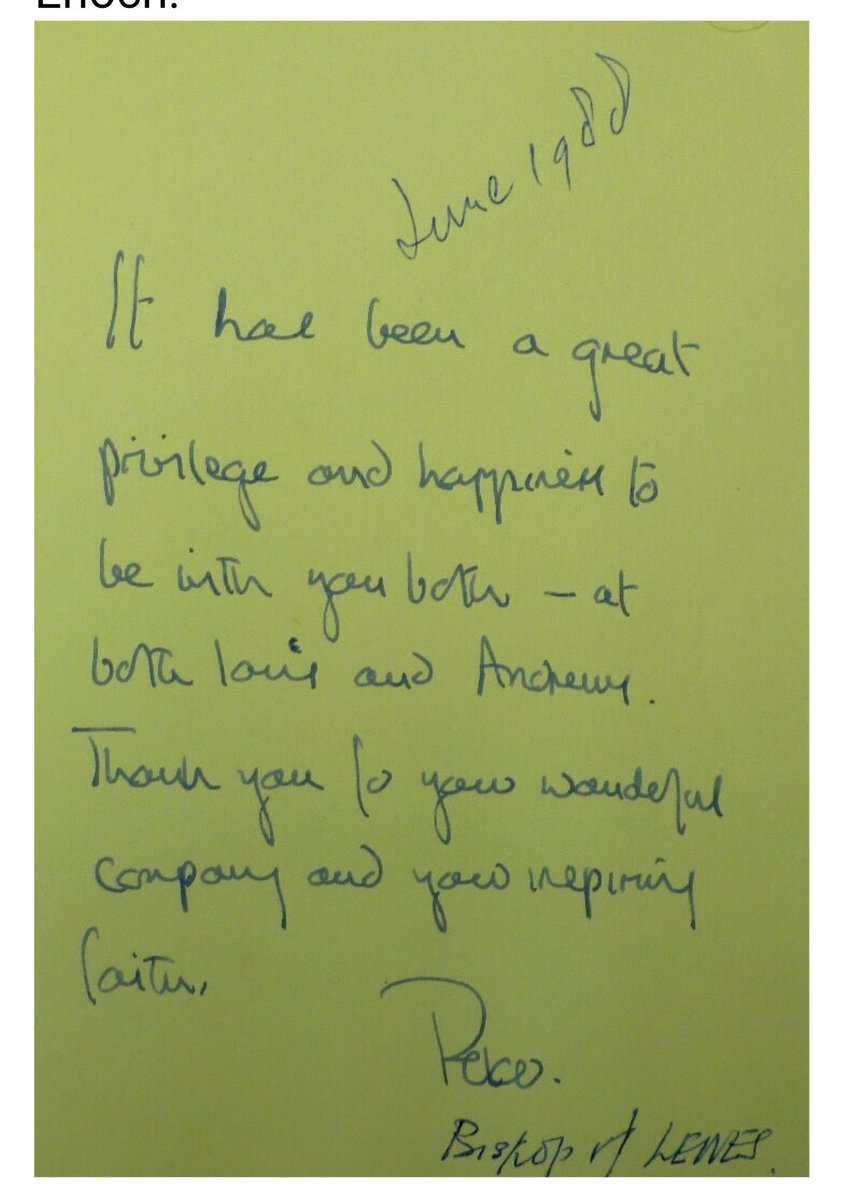 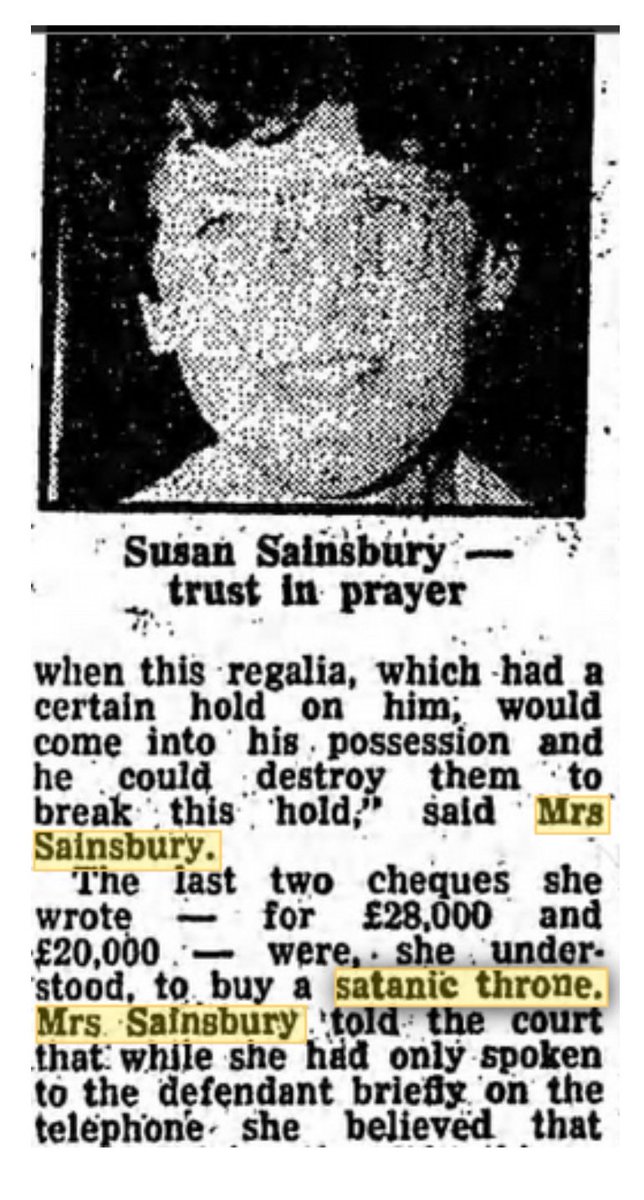 Sainsbury contacts to the Krays twins were legion, too. Here we have Lady Sainsbury contributing a foreword to a book by Chris Lambrianou, jailed for murder as part of the Krays' gang.
https://www.mirror.co.uk/news/uk-news/krays-gangster-admits-dumped-body-6400288
https://www.abebooks.com/9780340671191/Walls-Down-Reflections-Lifer-Chris-034067119X/plp 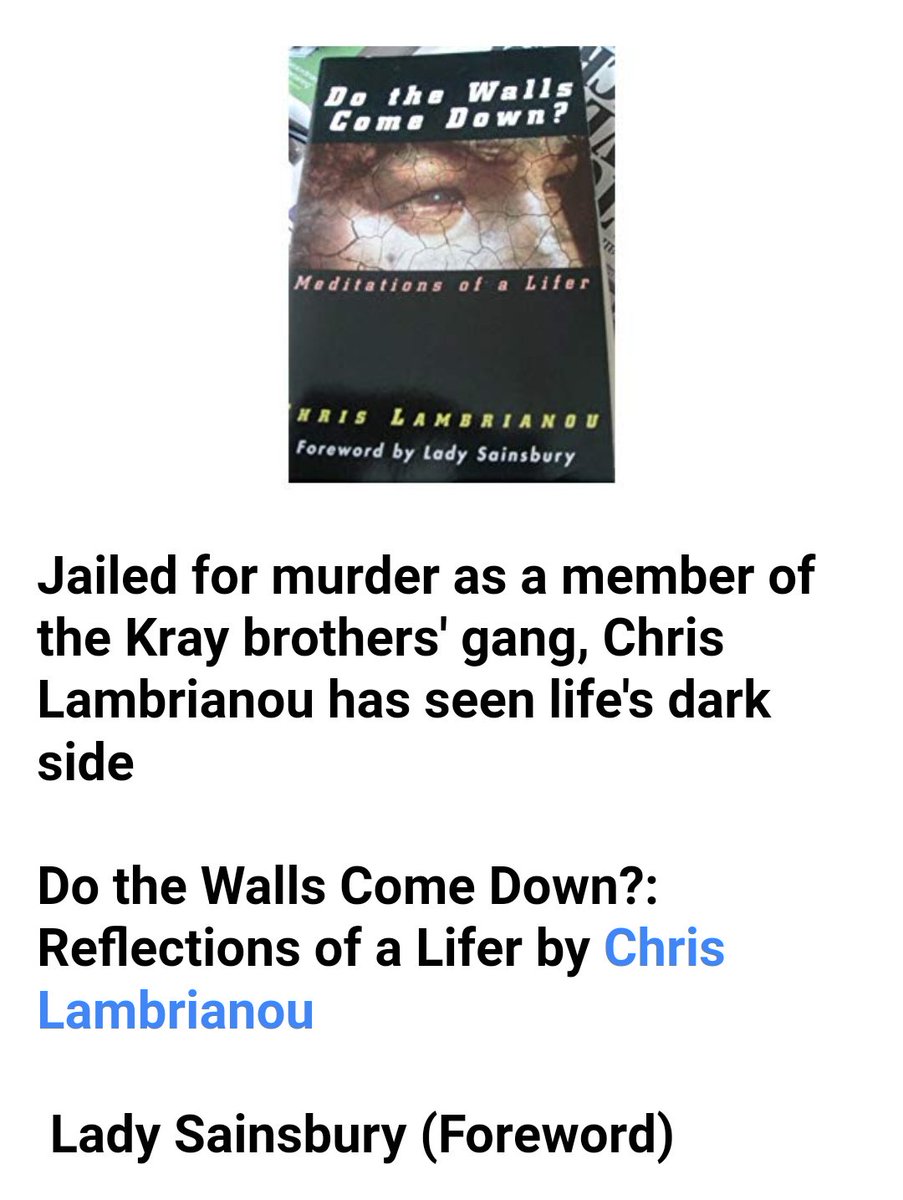 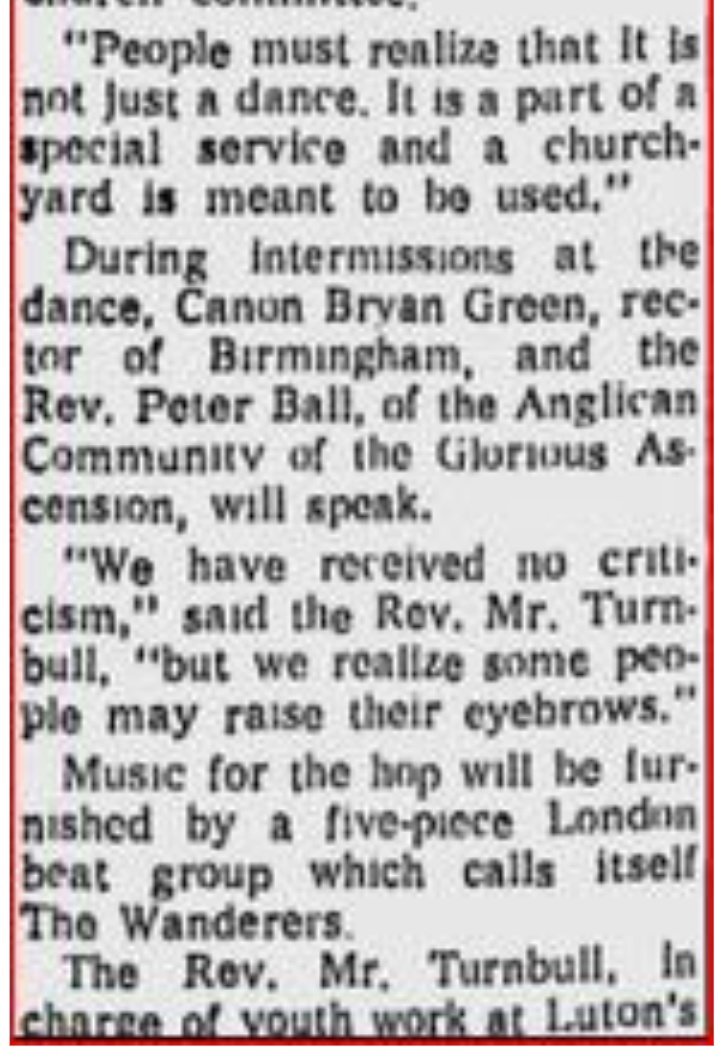 The Rev. Turnbull who organised the 1965 graveyard bop and hot dog roast at which Bishop Ball spoke went on to become domestic chaplain to Donald Coggan, the Archbishop of York, and later, in 1984, Bishop of Durham.
On 30 August 1968, as undercover policemen kept watch on public toilets in Hull, Turnbull was caught committing an act of gross indecency with a Yorkshire farmer. On 13 September, Turnbull, still chaplain to the Archbishop of York, pleaded guilty to the offence.
The disclosure of Turnbull's gross indecency conviction came just four weeks before his scheduled enthronement. His past was known to the archbishops of Canterbury George Carey and York Stuart Blanch, to Lord Runcie, the previous archbishop and to Lord Coggan.
So, once again as with Bishop Ball, we have Don't-Carey turning a blind eye to a pervert bishop, even tasking him with producing a plan to save the Church of England! The commission was given the nickname 'Turnbull Commission'.
The 1995 Turnbull Report 'Working As One Body' included a clause allowing people convicted of child abuse to become churchwardens in a package of changes to the lay office. This, unsurprisingly, provoked bitter criticism. 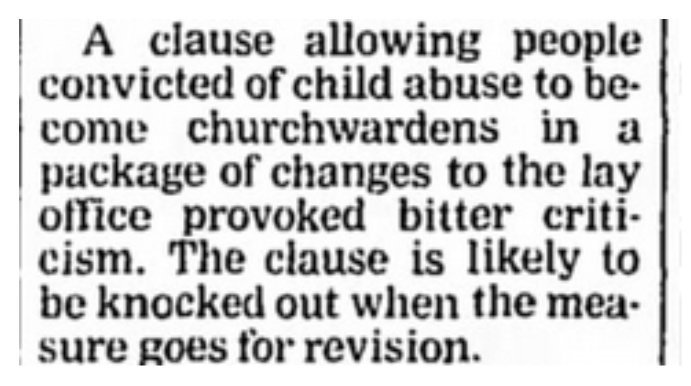 While the pervert Ball was counselling his friend BigEars, the pervert Turnbull was busy paving the way for Charles to remarry ... https://www.irishtimes.com/news/prince-should-remarry-says-bishop-1.211530?mode=amp
Prince should remarry, says bishop

https://www.irishtimes.com/news/prince-should-remarry-says-bishop-1.211530?mode=amp
You can follow @ciabaudo.
Tip: mention @twtextapp on a Twitter thread with the keyword “unroll” to get a link to it.